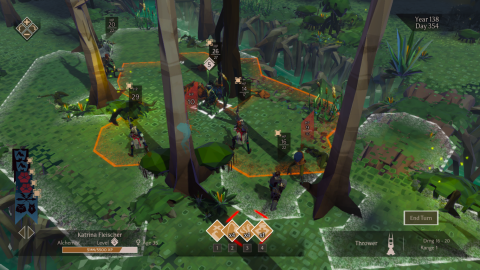 What is it? A mix of fantasy kingdom strategy and turn-based tactics, distinguished by the concept of character bloodlines
Influenced by: XCOM, Crusader Kings
Reviewed on: i5, GTX460M, 4GB RAM
Play it on: Intel Core 2 Duo 2.2 GHz, 4GB RAM, 512 MB GeForce 220
Alternatively: XCOM: Enemy Within (85)
Copy protection: Steam

The boring but accurate way to think about Massive Chalice is that it’s a fantasy-flavoured XCOM reboot, one that trades UFOs for a demon-spawning blight and Mission Control for a gigantic, self-aware goblet who sounds a bit like Femshep and a bit like Jonathan Pryce.

As in Julian Gollop’s exercise in stargazer’s paranoia, a gradual build-up of troops, resources and facilities is bruisingly punctuated by turn-based tussles over regional maps, with the threat of character permadeath never far away. The tug of war between immediate tactical considerations and broader strategic objectives is always on your mind—constructing a Crucible training facility rather than researching a new armour type might cost you the next battle, for instance, but win you the one after, as the quality of new recruits improves.

There’s more, however, to Double Fine’s latest than what it gleans from XCOM, which is just as well given that it doesn’t quite glean enough to be a serious rival. In a nutshell, it’s all about the perils of badly organised sex.

To illustrate that, allow me to present Exhibit A: Clan Fausbore, a cornerstone of my empire for around a century. Once upon a time the Fausbores were a family of nimble, supremely fertile Trickshots (think “archer class” plus explosions), but roughly 40 years ago the household head had a nasty falling-out with her husband. Approached for counsel—the campaign randomly serves up scripted dilemmas like this to keep you on your toes—I naturally advised that the couple tough it out for the sake of the realm.

Mrs. and Mr. Fausbore agreed, grudgingly, but acquired the “Passionless” personality trait in the process, dramatically reducing their odds of further offspring. This then rubbed off on the lion’s share of their existing children, and the result is that my kingdom’s future now lies mostly in the hands of pissy old snipers who refuse to breed.

The neighbouring Saetres aren’t as inhibited. They’re at it like rabbits, bless ‘em—near-sighted rabbits who drink too much. My solution to the resulting population explosion is, I feel, highly elegant: I’m signing up every Saetre I can to the Sagewright’s Guild, whose members practice lifelong celibacy. This will speed the researching of a fancy flask, which teleports its thrower to the impact site. More importantly, it’ll mean that future generations of humanity’s finest won’t show up to every other scuffle with a stat-crippling hangover.

Massive Chalice’s handling of character genetics is its strongest feature by far. There’s something both ugly and beautiful about how the game perverts one of XCOM’s staple sensations: the fondness players build up for the troops under their charge. As your 300-year (15-20 hour) reign wears on, you’ll come to look at heroes not with affection but the brisk eye of a cattle trader. Is it worth marrying this spindly greyhair to a 16-year-old, in hopes that he’ll crank out one last sproglet before the reaper arrives? Or should you pack him off to the front lines to raise his level and thus the odds that he’ll spawn a powerful Relic on meeting his end?

If only the combat were as visionary—it’s well-executed but insubstantial. Visibility and cover are factors, but there are no flanking or elevation variables and only a handful of enemy categories, though the offerings there are novel. Most memorably, you’ll clash with Wrinklers that rapidly age whoever they manage to hit, and hulking Twitchers who teleport-swap places with the first opponent they see.

The AI isn’t sparkling, either. Enemies sometimes ignore the arrow-filled corpses of their comrades, and pathfinding is an issue (often to your advantage) on the more labyrinthine maps. Still, the mix of abilities, traits and terrain types captures enough of XCOM’s magic to stave off boredom for the majority of a playthrough. Among other tricks, you’ll use a Caberjack’s ram to smash a self-detonating Rupture in amongst its allies, and deploy arrow types that leave a trail of camouflaging foliage.

Another, more subjective niggle is that the game is a little too easy once you’ve gotten through the early stage of the campaign, when hero bloodlines are in their infancy. Quality of heroes may vary, but manpower itself isn't really a worry—once you've appointed a regent and partner, regional keeps spawn hero trainees at a decent rate, who level up automatically in accordance with their parents' stats till ready for battle.

Judged as a spiritual child of XCOM, Massive Chalice is more of a brainy second son than an all-conquering firstborn. It turns in some clever twists, but doesn’t offer enough baseline complexity to support the kind of dazzling reversals the other franchise is celebrated for. It feels like the start of a promising bloodline, however. Perhaps one of its descendants will rise to greatness.

Maps in the Salt Stacks feature destructible pillars - certain potions let you create your own.

Be sure to create a bloodline for each class, or your options later will be limited.