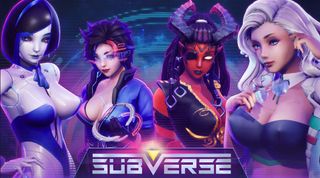 Images in this article are NSFW.

The Kickstarter page describes Subverse as "a tactical RPG/SHMUP hybrid that takes place in a fully explorable galaxy where you get to be the Captain of your very own ship...which is crewed by the sexiest and deadliest waifus you can recruit." It promises a story, grid-based combat reminiscent of a simplified Shadowrun, and women designed by "world-renowned art director and squidgirl-titty enthusiast Dzung Phung Dinh."

Out of the 12,868 videogame Kickstarters since 2012's Double Fine Adventure, only 18 have pulled in more money than Subverse. In its last day, it has a good chance of surpassing Divinity: Original Sin 2 and Star Citizen. Subverse likely isn't going to raise another $200 million post-Kickstarter like Star Citizen has, but it's also a narrower pitch. Star Citizen promised the most immersive space game ever, from the creator of Wing Commander. Subverse says: You can have sex with a bunch of women, and also play some SHMUP and RPG combat segments. But mostly it's about the sex.

The thing that makes Subverse's success even more impressive, when you look at the history of gaming Kickstarters, is that most of the biggest earners date back to a time before crowdfunding fatigue had settled in.

All-time champ Shenmue 3, with $6.6 million, started in 2015. So did runner-up Bloodstained: Ritual of the Night (both will supposedly be out this year). Many of the other big earners are even older: 2012 for Wasteland 2 and Elite Dangerous, 2013 for Mighty Number Nine and every game that followed that initial wave. By 2016, almost no videogame was pulling in $2 million+ on Kickstarter anymore.

Its only close contemporaries are Firmament, that new Cyan game, and another Cyan project from 2018, a Myst anniversary collection. And compared to most crowdfunding campaigns, those projects are sure bets. Before Firmament, Cyan Kickstarted another Myst spiritual successor, Obduction, which turned out well. And even if the Myst anniversary collection's promised tchotchkes ended up disappointing, well, the games themselves already exist—there's only so badly that one can screw up.

For videogame crowdfunding, years of late, MIA, and disappointing games have dampened the enthusiasm that Kickstarter once ignited. Some of the all-time biggest Kickstarters, meanwhile, have happened fairly recently. Critical Role pulled in $11.3 million this year for an animated series. Board games continue to do well, and one earned more than $5 million at the end of 2018. In fact, between 2015 and 2018 board game funding on Kickstarter has grown from $84.6 million to $165 million annually, while videogame funding has fallen off a cliff, from $41.5 million in 2015 to only $15.8 million in 2018.

"Divinity: Original Sin 2 used a similar system where enemies had physical and/or magical armor on top of their hit points… My question to you is: how exactly does your armor system work in order to avoid problems similar to those in D:OS 2?"

"Do you have characters like futa?" (If you don't know what it means, maybe don't look it up)

"An idea for ending mechanism, bear with my [sic], usually there are two flawed ways to end an game…"

"Tbh i don't give a damn about the game play. I just wanna see tits."

And of course, sometimes those two passions combine:

"From a purely academic perspective, will any of the mantics be egg laying hand holders?"

Apparently "hand holding" is the project's codeword for sex, and you'll see it brought up again and again in the campaign's 13,000 comments. It's a lot of comments. For comparison, the last mega successful gaming Kickstarter, the MMO Ashes of Creation, has accrued fewer than 5,000 comments since its campaign in mid-2017. Maybe those fans are simply talking elsewhere, but it's clear there's enthusiasm for Subverse that no gaming Kickstarter has matched in years.

What is now one of the most successful Kickstarter game campaigns of all time leads with this pitch: "Turning our curious eyes toward the glittering stars speckled around our little blue planet, we have often asked ourselves the eternal question: Are we alone in this universe? What is out there? More importantly… can we bone it?"

The audience's answer appears to be a loud, emphatic yes.