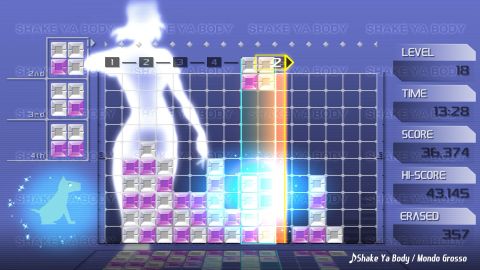 Lumines can still pull you helplessly into its block-swapping, rhythm-matching heaven.

How easy it is to forget the intensity of a good Lumines session. How quick it is to remember. This puzzle classic, which blends block-dropping action with beat-dropping rhythm, is still enthralling nearly 15 years after its original release on the PlayStation Portable, and 10 years after it first emerged on PC. Now it reemerges, this time properly built for PC, pin-sharp and remastered and feeling just as fresh to play, even if its tunes maybe don’t sound that way.

Lumines (that’s LOO-MIN-NEZ) has a simple basic premise. You rotate and drop two-colour configurations of 2x2 blocks into a wide Tetris-style well. When you form squares of same-coloured blocks in the well, they’ll clear. When the well fills up, it’s game over. But just as Rez is rather more than just an on-rails shooter, Lumines is more than just a simple puzzle action game. Like Rez, which was also developed by Tetsuya Mizuguchi, it uses music to add new layers to the experience.

On one level, you hear feedback on every drop and clear in time with the rhythm, pulling you into its mid-'00s-style euphoric house and jazzy hip hop-inflected electronica. You don’t feel like you’re playing along so much as simply part of the music. On another level, the music provides the meat of Lumines’ mechanics.

The tempo of tracks affects how fast blocks move down the well before you drop them, so a fast track might well be a harder one, forcing you to make quick decisions that spell your downfall. It also affects how blocks clear. As you play, a line sweeps from left to right across the well in time with the music, and matching blocks are only cleared from the well when the line passes over them. You get big combo score bonuses from making multiple matches in a single sweep, so you’re constantly trying to make matches ahead of the line, taking risks on creating large expanses of colour before it passes. If you’re too slow, it might only clear part of your match, leaving cluttered blocks behind.

And then the track changes. In Challenge mode, you progress through a set sequence of music tracks, or ‘skins’, as the game calls them. It starts with the shimmering summer of Shinin’ by Mondo Grosso (Shinichi Osawa, who created most of Lumines’ music), with white and orange blocks against imagery of a planet and a disco telescope-thing. Then it mixes into Urbanization, beats-driven electronica that completely changes the mood to serious, almost sombre. The blocks change from translucent gems to flat white and green, making you have to adapt to identifying new visual patterns fast.

The game constantly refreshes its feel as you progress through Challenge mode. Later on, the drop-rate of the red and white pill-shaped blocks in the jazzy Just… will threaten to fill your well, followed later by the slow passage of the line in the balearic The Music in my Soul. Before you know it, 20 minutes will have gone by, a mark of Lumines’ immersive power and also the length of its play sessions: a mediocre run will be 30 minutes, a happy half-hour, sure, but a long time to invest in failing to beat a score on the online scoreboards.

As you play through Challenge modes you’ll unlock skins in the unfortunately named Skin Edit, in which you can make up playlists. There are 40 skins in total, each with its own visual style and sound. You’ll unlock other skins in VS CPU mode, such as my personal fave Japanese Form. It’s so hard I don’t quite believe it’s possible to win all VS CPU’s 10 matches, but the two-player battle version of Lumines is excellent. It divides the well into two sides, one for each player. At the start the sides are of equal width, but as you combo the dividing line moves into the other player’s territory, squeezing the space in which they can stack blocks. Sadly, its fun is proportional to the shame that it only supports local play.

Then there are Mission and Puzzle modes, in which you have to drop blocks to achieve certain objectives (erase all in two steps or clear a column) or to build little pictograms of dogs and alligators. With Time Attack, too, which mitigates some of Challenge’s issues with session lengths, the original’s full suite of modes is here.

Lumines wasn’t served awfully well on its first appearance on PC, which didn’t support modern resolutions. Now it does, and its remastered music also sounds pristine. But I personally can’t quite shake the sense that Lumines was originally designed for PSP, for train journeys and lying sprawling on the sofa, because that’s where I cut my formative experiences with it. Lumines Remastered’s lack of online multiplayer is regrettable, its session length still demanding and, frankly, it’s probably a better match on Nintendo Switch, but it does the important thing: it brings a puzzle classic back into focus and proves that Lumines can still shake ya body down to the ground.

Lumines can still pull you helplessly into its block-swapping, rhythm-matching heaven.