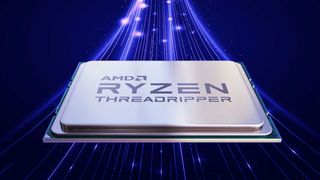 When it comes to PC hardware, the period between Christmas and New Year's Day has historically been the quiet before the storm that is known as CES, the annual tech event that sees a blizzard of announcements. Will new a new Threadripper 3980X processor be among them? It very well could be, if a popular utility is any indication.

A 3980X has been the subject of rumors for at least a couple of months, though as of right now, AMD has not made any mention of it. However, MyDrivers dissected the code for the latest version of CPU-Z (v1.91) and spotted a reference to the unannounced part. I took a look myself and confirmed it is there, jammed conspicuously next to the 3990X.

CPU-Z is a popular utility that gathers up various information about your setup, including details about the processor such as the name and model number, codename, process node, package, cache levels, and more. It's possible the developers either have their hands on a 3980X engineering sample, or have been provided information by AMD in anticipation of the CPU's launch. Or it could be an assumption on their part.

Whatever the case might be, it's certainly plausible we will see a 3980X. And if so, it will almost definitely wield 48 cores and 96 threads. Here's where it would fit in AMD's current generation Threadripper hierarchy:

The 3980X would fill the only gap in the existing lineup. Of course, like all HEDT processors, it's overkill for a PC that is used strictly to play games—if shopping for the best CPU for gaming, 'mainstream' desktop processors are more sensible choices (and even faster in some cases).

Still, the Threadripper lineup serves a couple of purposes. It gives power users and enthusiasts a higher end solution without dipping into true workstation territory, and AMD earns itself bragging rights.

While I'm fairly confident about the core and thread counts on the 3980X (assuming it exists), pricing is another matter. Pricing will either run north of two grand, or AMD could slash the MSRPs on the 3970X and 3960X, and position the 3980X at the $1,999 price point. That may also depend on when exactly AMD sees fit to announce the 3980X.