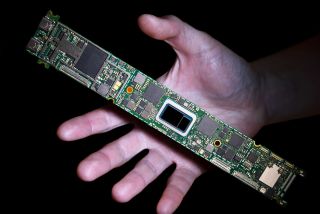 Spotted by one Twitter user this morning, someone has uploaded what appears to be benchmark scores for Intel's 11th generation processor, aka Tiger Lake. The scores uploaded to Geekbench are just for the Tiger Lake-U processors, though, since Intel is only planning to include them in laptops at the moment. We could see them in desktops sometime in the future, but that would be after Comet Lake makes its appearance first.

Until now, there haven't been any hard numbers to indicate how Tiger Lake's performance will stack up against the performance of its 10th-gen processors (aka Ice Lake). Assuming the Geekbench numbers are true, Tiger Lake-U has some modest gains in performance: a single core score of 1400, and a multi-core score of 4920.

The bigger question, and the question that remains unanswered, is how Tiger Lake will perform when it comes to games. Intel claims the Xe Graphics performance of Tiger Lake will be double what you can get out of Ice Lake, the i7-1065G7 and Iris Plus Graphics specifically. That would make for a relatively potent gaming solution in a thin and light laptop (if it ends up being true).

There's still no word on when Tiger Lake will come to laptops (Intel mentioned at CES that units would ship to OEMs this summer, which could mean Q2 or Q3 of 2020), but Intel will have to contend with AMD's Ryzen 7 4000 mobile processors, which launch in February 2020.

The same Twitter user also leaked a Time Spy CPU score for the Ryzen 7 4800H, comparing it to 3rd and 2nd gen desktop Ryzen processors. At CES, AMD claimed that its 4000-series mobile processors would have desktop-grade performance. If these numbers are true, it appears that the Ryzen 7 4800H nudges past Intel's Core i7-9700K.