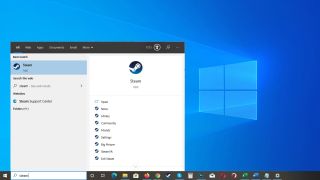 You may have noticed that your Windows 10 PC is bugging out today, specifically when you try to perform a search. If misery truly does love company, take solace in knowing you are not the only one.

Multiple reports have surfaced of Windows 10 coming up blank when attempting to search from something using in the Start menu. It doesn't seem to be affecting everyone, but there is a growing contingent of frustrated users on Reddit, as well as on social media and from various outlets around the web.

This is not anything you might have done to your PC. The issue rests entirely with Microsoft, and initial investigations into the matter suggest it's related to the integration of Bing search into Windows search.

"There is a lot of evidence in the JavaScript source to suggest that it was built by the Bing team. If I had to guess, I’d say that what happened here was that the desktop search experience was moved from the Windows team to the Bing web team, and they just don’t have the skills to build desktop programs with efficient C++. And, it looks like there is a mechanism to update the JavaScript code from a remote server, without actually upgrading the Search application itself," Warren Rumak, who works at Autodesk, stated on AskWoody.

Want an even easier method?

If you're too lazy or nervous about editing the registry, there is an impermanent solution: Simply open Task Manager, find Cortana.exe in your processes list, and end that task.

You might lose some of Windows 10's smart search functionality and if you reboot, Cortana.exe will be back, but it will immediately stop the search bar from going haywire.

"Maybe this also explains why the bugs with the new Windows Explorer search bar haven’t been acknowledged by the Windows team … could very well be that the Windows team doesn’t even own that code anymore," Rumak added.

In some cases, this also affects searches in File Explorer, as noted by Lawrence Abrams at Bleeping Computer. It varies, though—Brad Chacos at PCWorld says search is broken in the Start menu on his Windows 10 PC, but not in File Explorer.

If you're affected by this and can manage it, your best bet is to wait for Microsoft to issue an inevitable fix. However, if you absolutely need to use search and are comfortable mucking around in the registry, disabling Bing search should fix the issue. Just be warned that you can break things in by altering the Registry, so proceed with caution.

The easiest way to do this is by downloading a Registry file from Bleeping Computer, double-clicking it, and following the prompts. If you'd rather edit the Registry manually, follow these steps:

Following the above steps should restore search functionality in Windows 10. If it doesn't reboot your PC.