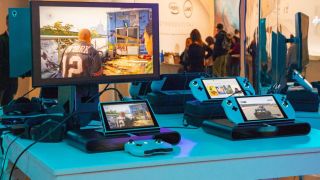 Alienware's Concept UFO was the talk of the town at CES 2020, but is it something we need? (Image credit: Future)

Alienware showed off a prototype handheld gaming PC called the Concept UFO at CES 2020. Looking at the UFO, your first instinct might be to think that it's basically a Nintendo Switch with your Steam library, which in theory sounds like the best thing ever. It does seem that the UFO was heavily inspired by the Switch, and it even improves on some of the Switch's design shortcomings (like the flimsy kickstand and problematic joy-cons). It has a big, bright 8-inch display, detachable magnetic controller, and well-built kickstand. It even has a dock that connects to a monitor. But that's where all the comparisons stop, since the UFO is a fully functional Windows 10 PC.

We've seen attempts at Windows 10 gaming devices from hardware manufacturers in Asia with, let's say, mixed results. Being able to bring your entire PC gaming library on the go is an incredibly appealing proposition, and Alienware even designed special software that acts as a universal launcher for your games regardless of where you bought them. You can even connect a keyboard and mouse to the UFO and use it as a PC for gaming or normal productivity.

I spent some time playing F1 2019 in handheld mode and World War Z docked and connected to a USB-C monitor, for a more traditional gaming PC setup. Concept UFO's shoulder buttons were a bit too small and the trigger placement was a little off. When playing F1 2019 I found myself accidentally hitting the trigger when I wanted to hit the shoulder button, because the trigger and bumpers feel too much like one large button instead of two. The same thing happened when I tried to mow down tons of zombies in World War Z.

The resolution running in both docked and the handheld mode was 1200p, which beats out the Nintendo Switch's 720p in handheld and 1080p in docked mode. (Alienware wouldn't say, but it looked like the games were running at medium settings.) The framerate remained stable even in a game like World World Z where you are often overwhelmed by zombies and explosions. It's hard to speculate on how more demanding games will run since Alienware didn't disclose the UFO's specifications, but I do like the idea of being able to play Cyberpunk 2077 at the dog park even if it's on lower settings.

I do wonder about the practicality of using something like UFO on a commute given that Steam, Xbox Game Pass, and other digital storefronts require some sort of internet connectivity in order to run your games. Steam offline mode is an option, but would likely be a pain to activate every time you leave the house.

Hell, I wonder if this thing could last more than an hour on batteries. Again, it's a prototype, so I'll cut Alienware some slack, though it did say the UFO will have wi-fi capabilities. Since it's running Windows 10, it's safe to assume that there will be an SSD, so you can download and install your games to play on the go in offline mode. But just how much storage space is unknown, and if you can play in offline mode, that makes cloud syncing a challenge—and being able to pick up where you left off on your PC later feels like a crucial feature.

If we are still comparing it to Nintendo products, the UFO feel like it had the weight and girth of a Wii U, minus all the weird gyroscope and accelerometer controls. It's lighter than a typical gaming laptop but heavier than a Switch/ Switch Lite. This won't replace your primary gaming laptop, but it is more portable and less unwieldy to whip out on a train.

Outside of the fact that the Concept UFO has an Intel 10th-gen processor, there are still a lot of questions unanswered about the hardware specs, battery life and price points among them (We're guessing it's not cheap). We don't even know if Alienware will even turn it into a real product. The more and more I thought about the Concept UFO, the more it made me want a Nintendo Switch Pro. When I held it in my hands I kept thinking how much I wish my Switch was more like this—a beefier processor, with a higher resolution screen, better controls, and Bluetooth that doesn't feel so fragile.

Given the reaction and general excitement at its unveiling, though, I wouldn't be surprised if Alienware is working even harder to make the Concept UFO a reality. Hopefully, if there's ever a consumer release of the UFO, I'd love to be able to just connect a Bluetooth gamepad of my choice. And if not, hopefully, Nintendo will take note for future redesigns of the Switch.