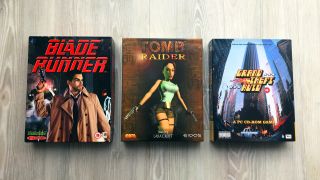 Indulge me, if you will, while I get nostalgic about cardboard. In the late 1990s, the great beige monolith whirring under my desk was the most important thing in my small world. I’d taken up PC gaming in a big way, playing the likes of Baldur’s Gate, StarCraft, Unreal Tournament, and Grim Fandango for so long at weekends I’d see the sun rise. I have vivid memories of dusky morning light creeping into my bedroom, knowing that I should have been tucked up in bed hours ago, but having too much fun to care.

I also remember the bookcase where I kept my games, which were still being sold in those big, beautiful cardboard boxes at the time. When I was deciding what to play, I’d roll my chair over and drag my finger along the rows of boxes, occasionally plucking one out to read the manual or look at the screenshots on the back. I’m sure this is blinkered nostalgia talking, but that felt more special to me than just idly scrolling through a Steam library with a mousewheel. There was a ceremony to it, and the artwork on those blocks of cardboard felt, to my young mind, like portals to other worlds.

I missed vinyl the first time around. The first album I ever bought (Pulp, Different Class) was on CD. So I never really understood why records were so coveted, at least until I bought a few myself in later life. There’s something thrilling about seeing an album cover that’s usually a thumbnail squeezed into the corner of a media player printed big and loud and vivid on a record, and I feel the same about boxed PC games. It makes a game feel like something to be cherished, held, and admired instead of just another entry in a digital library.

As I tumble into my thirties, I find myself getting increasingly misty-eyed about the past. Pop culture has become a raging mudslide, with new games, movies, albums, TV shows, and podcasts cascading through my computer, phone, and Chromecast at an impossible rate. Games that have been in development for years are forgotten a month later, articles are swept off the front page of a website in minutes, and how the hell is that podcast I started listening to the other month at episode four hundred already?

So maybe that’s why, despite living in a flat smaller than some hotel rooms, I’ve decided to start collecting big box PC games. As a reminder of when videogames felt like they had some kind of permanence. That they were more than just another piece of fleeting content designed to fill the void. Obviously games are better than ever, and I’d rather play Dishonored 2 than some of the rubbish I was into back in ‘98, but this is nostalgia, not logic.

I’m carefully curating the collection, though. While I admire the exhaustive efforts of folk like LGR to archive as many games as possible, I only have a small space to work with. So I’ll be choosing games that A) I used to own when I was a kid or B) are important milestones in PC gaming in some way. As I’ve just begun this ludicrous journey I only have a few so far, but I’m already getting a buzz out of leafing through the chunky manuals and unfolding the maps.

And it’s cool to see some modern games being released in oversized boxes, including Thimbleweed Park, cleverly taking advantage of this nostalgia for cardboard. To people of a certain age this will seem like some embarrassing, backwards, rose-tinted bullshit. But then phones will be replaced by brain implants and those people will be collecting iPhones, yearning for those days when you had to physically poke a glass screen with a finger to send a tweet rather than just think it. Every generation covets something from its past, even if it’s shit, and mine just happens to be impractical cardboard game boxes.

If I actually want to play these games I’ll just fire them up on GOG or Steam or wherever, because it’s a million times more convenient. But that’s not the point. The point is that these big, stupid boxes look cool as hell, and they transport me back to a time when my favourite PC games were a little more tangible. Now I can combine the best parts of being an adult—like having a cheeseburger whenever I want—with tech tree posters and densely-detailed manuals from the greatest games of my youth.