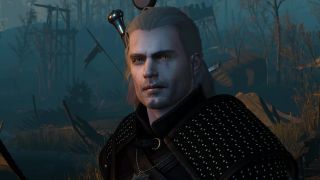 The popularity of The Witcher Netflix series is bringing more people to the games than ever, with The Witcher 3 breaking its record for concurrent players on Steam just last week, nearly five years after release with over 100,000 players. It's safe to say that Henry Cavill's Geralt of Rivia carries the same magnetism as Doug Cockle's, the grumpy charmer we know and love.

But why not make the two things we love into one thing we love? Toss a coin to your witcher and toss aside your aversion to the uncanny: we're making a monster—a monster hunter by plastering Henry Cavill's face and body on The Witcher 3's Geralt.

And we're going to do it right.

We've already written about the Henry Cavill face mod for The Witcher 3 before, but there's been a steady stream of 'retextures' in its wake. There's also a couple body mods, a sword mod, an armor mod, and plenty more to consider. Let's sift through them all and find the best Henry trimmings for our baked Geralt.

1. Install The Witcher 3 mod manager. It'll make this all a lot easier. While you're at it, pick up a few of our favorite Witcher 3 mods.

2. Install the Henry Cavill head and body mesh from Adnan over on Nexus Mods. There's an Anya Chalotra head mesh for Yennefer too, if you're interested. You'll need Hearts of Stone for it to work, but you'll want that excellent expansion anyway.

Adnan did the difficult work of shaping Henry's face and body, but something's wrong the way the light hits it. The furrowed brow, eyes, and cheekbones make our boy look like a damn wraith rather than a macho monster hunter with poison coursing through his veins. This is a great foundation, geometrically speaking, but the retextures are where the magic happens.

A big no-no for me. Our guy is still looking like a weird stunt double. Yian hasn't done much to Adnan's work, though the big draw for this mod is the Hearts of Stone option. If you want to make sure Geralt's runic face drawing fits on Skele-Cavill in the HoS expansion, this is a decent mod to have around, but it's still a little too damp and—I can't quite articulate what's wrong here—inverted? Like one of those hollow-face optical illusions where a concave mask has the appearance of a convex face that follows you where ever you go. It's creepy is what I'm saying.

Now we're talking. Easily my favorite face for the purposes of The Witcher 3. This face darkens Henry a bit by ironically making him paler, which highlights the stubble and contours of his face for a more natural, witchery look, and adds a Striga scar to fit Henry comfortably into the game's timeline. This is the face texture to use.

Geralt's hair is a bit longer in the show than the hair the game starts with, so I recommend going with something long as soon as you find a barber. To really accentuate those locks while keeping our beloved hair physics intact, try out CraniumJ's alternative long hair mod. It's glossier and more responsive to wind.

It ain't a perfect recreation, but we'll take it for now. Dimkich's steel sword mod aims to recreate one of Geralt's Netflix blades for use in The Witcher 3. It's not the most detailed model, a bit too simple with the color and geometry, but at a glance it looks familiar enough.

This mod's a must, as long as you're willing to forgo the specialty looks and stats the game's armor provides. ReplicantPolice's Viper Armor nails the look of Netflix Geralt's studded leather getup.

Or just the amulet

If you'd prefer to keep the lovely in-game armor around and just swap out a sigil, Jatodude1's alternate amulets mod will suffice. It changes Geralt's pointy wolf pendant into the show's flat, circular version, and it's supported a good spread of popular armor sets. Ciri and Yen also get new amulets based on the symbols used in the show.

While there's no dynamic Cavill face mod that looks applies corpse paint in the lavish layers the show goes for as his toxicity increases, we can at least make his eyes turn black and light veins pop around his eyes.

Cavill doesn't grow much facial hair in the Netflix show, but throughout a playthrough of The Witcher 3, a beard is an inevitability. Problem is, slapping a new face on vanilla Geralt doesn't automatically change where hair is gonna sprout from. This beard mod from Skaters122 replaces the Mutton Chop facial hair with a beard custom built for Henry's square jaw.

And there you have it. He doesn't animate as well as vanilla Geralt and Cockle's VO is a bit less strained and deep than Cavill's, but we've successfully melded two worlds into one—a conjunctions of spheres, if you will. We're only a few weeks out from the show's release, too, so expect even more Henry mods to trickle out from now until Netflix stops changing Geralt's outfit. With a second season of The Witcher already confirmed, we'll at least get a few more years of this good stuff.