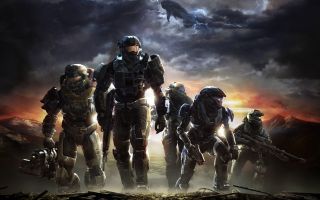 After years in the wilderness, Halo: The Master Chief Collection will bring Halo: Reach, Halo: Combat Evolved Anniversary, Halo 2: Anniversary, Halo 3: ODST (minus the Firefight mode), Halo 3 and Halo 4 to PC. We've finally seen the first fruits of 343's labor with Halo: Reach is out now, but there are still five more Halo games headed to PC in 2020 as part of the collection.

The only previous games in the FPS series to launch on PC were Halo and Halo 2, both well over a decade ago (if you don't count the Halo Wars spin-offs). This is obviously a big moment, and it seems like Microsoft is making some good decisions in bringing them to PC: Namely launching them on Steam, rather than trapping them on the Microsoft Store (though you can buy it there too). There's much more to go into below, too.

The PC version is being worked on by Halo stewards 343 Industries, Ruffian Games and Splash Damage. In total, the Master Chief Collection will entail over 120 multiplayer maps and 67 campaign missions—which should be enough to keep you occupied for a while. The idea is to "evolve and grow" the collection over time with community input, so it's likely we'll see more features added to each game after launch.

Here's everything we know so far about the Halo: Master Chief Collection on PC, including when you'll be able to try the games out in beta.

What are the release dates for The Master Chief Collection?

The Halo games are being released in chronological lore order

The Master Chief Collection will be sold on PC as individual titles, and as a pre-purchased package. They are being released in chronological order on PC, according to the series' lore. The order is as follows, then: Reach, Combat Evolved, 2, 3, ODST, and 4.

"Flights," Microsoft's word for beta testing for Halo: Combat Evolved are kicking off soon. During January, the Halo team is testing CE with a small group of external partners. The plan is to include registered Halo Insiders in testing starting in February.

You can sign up for the Halo Insider program to opt in for testing. Here's what's being tested for Combat Evolved when Insiders get into the game:

You can read more details about the Combat Evolved flight on Halo Waypoint.

Let's get the important stuff out of the way: 4K resolutions, HDR, and mouse and keyboard support have been promised as the standard for this collection, with each mentioned in the Steam listing. 343 says providing great mouse and keyboard controls is a "top priority", and that they're aiming for a "balanced, fun experience for PC."

Also in the works: support is planned for 16:9, 21:9, 16:10, 3:2, and 4:3 display modes, as well as 144hz displays (the plan is to support uncapped framerates—but it's been cautioned that this depends on what's feasible for the game in question). FOV sliders are also planned, though functionality could vary based on the game.

Split-screen co-op, a staple of the Halo series, seems less certain on PC. When asked about it during a Reddit AMA, Jarrard had this to say. "This one is tricky and the team is still looking at what can be supported."

Halo: Reach on PC will have an uncapped frame rate at launch, according to 343's latest dev blog. The studio cited problems with variable frame rate in its most recent test flight, but said the issues will be resolved in time for Reach's Dec. 3 release date.

To be fair, reworking an Xbox 360 game into a feature-rich PC game sounds tough. "We always knew and stated that some of these features would be a bit dicey given that the underlying games are old (9 years in this case) and were designed to run at 30FPS on a fixed platform (Xbox 360)," the post reads.

Halo: Reach doesn't have official mod support yet but you can still mod it anyway

While 343 Industries confirmed mod support earlier in the year, it wasn't planned to be ready for launch. In the meantime there's a solution that will allow you to muck around in the campaign and custom modes.

In the Halo subreddit's recent Weekly Discussion (cheers ResetEra), a 343 employee clarified that, while official mod support is still being worked on, this doesn't stop players from being able to enjoy the fruits of the modding community's labor, as there's an official workaround that will let everyone bypass Halo: Reach's anti-cheat tools.

"We’re still working to improve this down the road, but for now you will have an option when you launch to bypass anticheat," 343_farn wrote. "This will allow you to play around with campaign and customs but not allow you to play any match made games. I highly suggest making a copy/backup of anything you modify so you’ll be able to switch back and forth easily."

Halo on PC will a support custom games browser. The plan is to get some of Halo: CE's user-generated content into the Master Chief Collection, too. "We are always investigating ways to bring the wealth of Halo user created content to a larger audience for everyone to enjoy. Halo Custom Edition content is definitely on our list and is actively being explored."

Halo: The Master Chief Collection on PC will use the popular "TU" settings for Halo: Reach multiplayer

After weighing the options of staying true the legacy of Halo: Reach while also trying to improve the experience, 343 has decided to implement the popular "TU" settings across all of Halo: Reach's multiplayer. TU settings refer to a title update released late in Reach's life that rebalanced armor abilities and drastically changed weapon bloom. In the original game, some playlists used these settings while others changed. 343 sees the TU settings as overall better for balance, so they're sticking with them.

Halo: The Master Chief Collection on PC will have Halo: Reach-style progression in multiplayer

Staying faithful to Master Chief's original adventures is still priority number 1, but 343 is looking to refresh multiplayer progression across the board. The new progression will capture "the spirit of progression in Halo: Reach but deliver it in a more modern way," according to design director Max Szlagor. You'll be able to track your progress and unlock rewards. There will even be multiplayer seasons, each with their own theme.

Playing mid-season will earn you "season points" that can be cashed in for unlocks in Halo: Reach like armor pieces or Firefight announcer voices. The seasonal unlocks won't retroactively apply to other Halo games. The way those games handle unlocks will remain unchanged. Below is a work in progress mockup of what the seasonal system will look like.

Halo: Reach on PC has dedicated servers for Firefight and campaign co-op

With Halo: Reach on PC, gone are the days (hopefully) of laggy firefight matches. 343 is shifting away from the synchronous model that previously powered Reach's client connections. It worked okay for competitive multiplayer, but when having to interpret all of the AI and player movement of campaign and Firefight, it'd often fail to keep up. Now, dedicated servers will take the brunt the work and each player's client will sync with it separately instead of waiting for each other.

Forge or Theater mode didn't show up at launch, but they're in the works

In a 343 development update, producer Michael Fahrney said that they don't know when Forge and Theater will come to Halo Reach PC, but it wouldn't be soon. "From a development perspective, it makes more sense for the team to tackle Reach's Forge/Theater a little later in the roadmap at the same time as Halo 3 and Halo 4 work," Fahrney said.

"We need to properly give both features enough time, so they are a true PC-first experience," Fahrney said. "When you look specifically at Forge and what it truly is, it is a 3D editing tool that was built completely for console. In some cases, it’s built to have mouse and keyboard support, and in some it’s not—and that’s one of our biggest challenges right now with the feature."

That's a bit of a bummer, but it's better to take time and do it right. On the bright side, you'll be able to import levels previously made on Xbox 360 to the PC version via File Share. It's pretty incredible that custom maps made 10 years prior will live on.

There are still no plans to bring Halo 5, the sole Xbox One entry to date, to PC. It wasn't part of the Master Chief Collection to begin with, so that's no huge surprise. Hopefully if these entries take off on PC, the outlier will follow. But hey: six games is a hell of a start.

It's worth saying that Halo 5's Forge Bundle remains free to download on the Windows Store.

Let's take a moment to celebrate