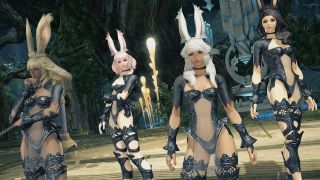 What's worse than one gender-locked race? Final Fantasy 14 answered that question this weekend when, at its annual Fan Festival in Japan, it was announced that the MMO would get two gender-locked races in its upcoming Shadowbringers expansion.

As you might guess, the reveal did not go over well.

The new races in question are the viera (pictured above), the bunny-eared ladies popularized in Final Fantasy 12, and the hrothgar (pictured below) who are inspired by the macho, horned cat-men of Final Fantasy 10. The viera were first announced during the European Final Fantasy 14 Fan Festival in Paris earlier this year. During that reveal, only female versions of the viera were shown, causing players to worry that viera would be Final Fantasy 14's first gender-locked race. But, during a press conference I attended following the event, someone asked game director Naoki Yoshida and he said the team would have more to reveal at the Japan Fan Fest later that year. Players took it as a vague confirmation that male viera were coming and breathed a sigh of relief. But then Square Enix announced the male-only hrothgar instead.

The response to the reveal has been largely negative, with Final Fantasy 14's subreddit being filled with threads criticizing the decision. Before Final Fantasy 14 was relaunched in 2013 as A Realm Reborn, the feline-like Miqo'te race was originally female-only, but Square Enix changed it (among pretty much everything else) in response to player feedback. Its decision to reintroduce gender-locked races is baffling.

"I'm genuinely disappointed," writes one redditor. "I don't care about the race not being my cup of tea, but about the gender locking after they said they'd not make the same mistakes of [the original Final Fantasy 14]."

As players have been quick to point out, Square Enix's logic just doesn't make any sense. In an interview with Gamespot, Yoshida pointed to lore from Final Fantasy 12 that explains that, though male viera do exist, they do not reveal themselves publicly. In order to honor that lore, Square Enix wanted to make viera only playable as women.

But what's annoying is the double-standard, here. The hrothgar are directly inspired by the ronso race from Final Fantasy 10, and there's both male and female ronso found throughout the game. The only reason Square Enix is restricting them to male-only is to provide an alternative to the female-only viera—and that just doesn't make much sense.

It's frustrating because Final Fantasy 14 is a game that prides itself on freedom of expression for its players. There's an enormous and robust fashion system that encourages players to have control over how their in-game characters look. It's hard to see what the benefit of gender-locking new races could have. Why would anyone want less freedom just to uphold lore from Final Fantasy games that aren't even directly related?

Fortunately, Square Enix seems to be listening. In that same interview with Gamespot, Yoshida said the team was poring through the feedback from the community. But Yoshida also refused to comment on whether the decision to gender-lock its two new races would be reversed. With the new Shadowbringers expansion just three months away, I doubt Square Enix will be able to adjust to the backlash and give the community what it wants, though. That's a big bummer if you want to play a guy but also have bunny ears (or want to play as a giant, scary lady-lion).

Fortunately, everything else about Shadowbringers looks excellent.