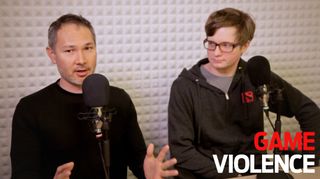 The debate over the relationship between violent games and violent behavior continues inside and outside the United States. In its initial response to the tragedy in Newtown, CT, the US government said it intends to ask the Centers for Disease Control to “study the root causes of gun violence, including any relationship to video games and media images.” Critics cite studies that link aggression and violent games, claiming that interactivity as a component of games makes them unusually potent. One politician labeled games as " electronic child molesters ."

It's an enormous and serious topic—one that we believe gamers shouldn't shrug off, but take it upon themselves to engage critics and fellow citizens on. In the interest of that, Logan , Evan , and Tyler hopped into our podcast studio (inappropriately, the room that most makes it look like we're inside an insane asylum) to talk about their personal relationship with violence in games.