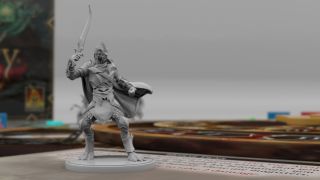 When I first saw that developer Larian was Kickstarting a board game adaptation of its acclaimed RPG series, I was skeptical. Don’t get me wrong, I love both Original Sin games. But if you’ve followed the tabletop scene at all over the last decade you’ll know that you can barely move these days for beefy, crowdfunded fantasy dungeon crawlers full of miniatures, cards, and tokens. How could a Divinity board game stand out from the crowd?

As it turns out, the same way the digital games do—with creativity, a quirky eye for detail, and most importantly lots of stuff catching fire.

For my hands-on demo, I join a party of four adventurers. Structurally it’s all familiar—we each pick a character, with cards and tokens defining our classes and abilities, and head out on an adventure. An accompanying book guides things, setting up the story with passages of prose and instructing you where to place components for each scene.

Environments are represented by a ring of cards, each portraying a different part of the area—a bandit camp, for example, features a stable, a cave, a campfire, among others. By spending a turn, your character can move to one and flip over the card, revealing what’s there, whether it be treasure, a clue, or a combat encounter.

Brilliantly, the art on the cards actually provides hints as to what you’ll find, with even subtle details potentially significant. Our mage has the Pet Pal talent from the games, allowing him to speak to animals. At one point, a forest card shows a tiny squirrel sitting on a branch in one corner. Surely just a bit of flourish from the artist? We send our Dr Dolittle over to investigate, and lo and behold the flipped card reveals a conversation with the creature that leads us to treasure.

When a fight breaks out, these cards become your battlefield, and it’s here that the game’s lineage really begins to shine through. It’s a bit abstract—a movement action, for example, allows you to walk either to an adjacent card, or across to a directly opposite one, making it hard to visualise where things are in relation to each other. But at the same time this facilitates an elegant approach to one of Original Sin’s most defining features: its elemental system.

Area attacks simply affect an entire card, with tokens representing lasting changes. Those tokens mark clearly how they in turn can be affected. Thus it takes no book-keeping or fiddly calculation to, for example, douse a forest in oil and then set it on fire.

Far from simply walking up to monsters and hitting them, we find ourselves triumphing in encounters through clever management of areas and status effects. Some parts of the board we want to make wet, to allow electricity spells to stun those within. But that makes everyone there resistant to fire spells, meaning our pyromancer should focus their efforts elsewhere. As a beefy knight, I’m keen to get into melee and keep dangerous foes occupied—but I have to balance that against getting caught in the magical friendly fire, working out which ailments I can safely endure.

At one point, our rogue is on fire and near death. We work out the best way to save him is actually for our mage to attack him - the water damage inflicted by his wand is enough to put out the flames, but low enough not to hurt him. It’s not an assumed function of the wand, it’s a totally emergent tactic that arises out of the solid internal logic of the game’s systems. Just like in its video game progenitor.

Everything from your ability cooldowns, to your action points, to your equipment follows the same philosophy. Wherever possible, the feel of Original Sin is maintained, to the point that familiar tactics work exactly as you’d expect. But that never results in fiddliness or excess book-keeping—the game’s complexity unfolds intuitively out of very simple, clear interactions between cards, tokens, and trackers.

In other words, Divinity: Original Sin the Board Game does exactly what it says on the box. This isn’t a popular license slapped on top of an all-purpose rules system—it’s a carefully crafted and surprisingly accurate recreation of the video game series in cardboard, dice, and plastic. If that sounds like joy in a box to you, you’ve got til October 2020 to find space on your shelf.

As editor of PC Gamer magazine, Robin hides in the world of print, guided by his belief that a review only exists if you can hold it in your hands. He loves RPGs, turn-based strategy, and absorbing pointless videogame lore.