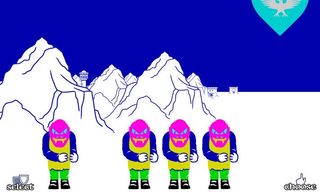 While GOG dropped the Good Old Games moniker a long time ago, it's still very much in the business of game preservation, hence why you can find the likes of Mike Singleton's 1984 classic, The Lords of Midnight. It's a piece of videogame history which, along with its sequel, you can now grab for free.

GOG added The Lords of Midnight to its catalogue back in 2013, so maybe you've already picked it up, but if not you can snatch both of them up right now without spending a penny.

There are shades of Heroes of Might and Magic, King's Bounty and King of Dragon Pass, with The Lords of Midnight jumping between an RPG adventure and a strategy romp. You can command heroic adventurers as they potter about, completing quests, and then raise the banners and send out your armies to batter the Witch King's minions.

The Lords of Midnight and Doomdark's Revenge are unmistakably games from the '80s, so don't expect much in the way of eye candy, though the retro graphics have, arguably, benefited from a high-res update. Both games also come with a novella, when you want to take a break from ruling for a bit of light reading.