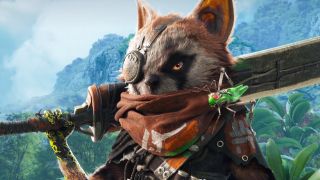 Whenever I hear something new about Biomutant, my ears perk up. Developed by new studio Experiment 101 and published by THQ Nordic, Biomutant’s premise is intriguing and its art is striking. It's an action-RPG, but with cats. Cats with swords, and guns, and kung-fu skills. There aren’t enough games about badass cats, and I’m glad something is being done about it.

Biomutant has been kicking around in various stages for years now, and in 2019 it still looks mighty ambitious. Here’s everything we know about Biomutant so far.

What is the Biomutant release date?

Biomutant was set to release sometime in 2019. It's now 2020 but THQ Nordic hasn't made any mention of a revised release window.

Developer Experiment 101, however, recently updated fans on Twitter about the status of the game. "We know many of you are wondering if the game is still in development. Let us assure you that we've never been working harder and more focused on it than now!" the post reads.

Experiment 101 goes on to say that it will "reveal the release date as soon as everyone at our studio feels confident about hitting that date and that the game is ready for it."

The latest chunk of Biomutant gameplay shows off a lot of ground and mech combat. It’s interesting to see the game bounce between post-apocalyptic environmental undertones and whimsy (mostly captured by the omnipresent narrator).

What kind of game is Biomutant?

Developer Experiment 101 officially describes Biomutant as a “post-apocalyptic Kung-Fu fable RPG.” That’s a mouthful, but it seems appropriate for the strange vibes that Biomutant puts off. From the limited gameplay we’ve seen, it’s essentially an action-RPG with an ambitious “Mutations” system that changes the genetic makeup of your custom cat hero over time.

There’s also a deep crafting system for making new weapons and armor. The gameplay demos so far have been fairly linear, but Biomutant is an open-world game with a 4x4 kilometer sandbox, not including its underground areas.

Biomutant has a unique take on post-apocalyptic worlds. Instead of your typical natural disaster, Biomutant’s world was destroyed by a massive oil flood that rose from the ground.

Experiment 101 has been cagey about the story, but it has emphasized that the choices your cat makes has a huge impact on the story. As an oil plague has infected the Tree of Life try to return vitality to the world, it’s your job to save it while uniting the world’s "tribes."

The Tree of Life quest sounds similar to Mass Effect 3’s "Galactic Readiness." Curing each of the Tree of Life’s "roots" will increase your percentage chance of saving the world at the end of the game.

Biomutant’s narrator speaks for every character in the game

As far as we can tell, there’s only one voice actor in the game—the omnipresent and pleasantly British narrator. Not only does he narrate the constant action of your protagonist, but he also voices every NPC conversation. It’s like he’s reading dialogue out of a fairytale, and it’s kind of adorable. There are several dialogue options in conversations, but we haven’t seen them impact gameplay.

Your custom cat’s physique will affect its stats

At the beginning of Biomutant, players will tweak their cat protagonist’s genetic code to their liking—including strength, agility, vitality, charisma, and intellect. Shifting them around in the character creator drastically changes the physique of your cat. They can be short or tall, buff or skinny, whatever you want. Stats have a direct effect on things like weapon damage, persuasion, and movement speed.

The "mutant" part of Biomutant comes from your cat’s tendency to pick up new powers when exposed to the post-apocalypse wastelands. We’ve only seen a few powers so far—a telekinesis ability that lets you hurl small enemies at each other, and an ability that stuns enemies and force them to attack indiscriminately by swarming them in moths.

In a sit-down with YouTube channel Radioactive Games, Biomutant representatives apparently compared the combat to Devil May Cry, and it’s not hard to see the influence. The combat is a mix of melee and ranged with the same lock-on style that DMC is known for. Melee is reliant on combos and crowd control.

You can craft weapons out of random pieces of junk

Supplies found in the open world can be used to craft unique weapons. We’ve seen swords, staffs, rifles, and pistols so far. One sword might have bent stop sign reinforcing the base while another uses a monkey wrench as a grip.

Your actions in Biomutant will teeter a simple Karma meter back and forth between good and bad. Apparently, you’ll see a different ending depending on your Karma by the end of the game. It’s not yet clear if this directly connects to your percentage chance to save humanity, as mentioned above.

Gameplay for Biomutant has been kicking around for years now, but everything we’ve seen is apparently an early build. Supposedly it's still coming this year, but 2019 might be an unrealistic release window.

Biomutant’s system requirements are a work-in-progress

Like everything else in Biomutant, its current system requirements are subject to change. But here’s what’s listed now on the game’s Steam page.