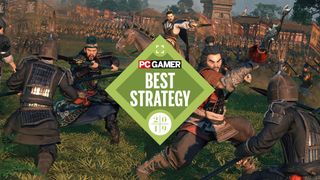 Wes: I'm 30 hours into a Three Kingdoms co-op campaign where I'm conquering all of southern China as Sun Jian. Meanwhile, my friend and neighbor Yuan Shu has had to become a vassal, then join an alliance, just to stop Cao Cao from trampling him. I keep giving him food out of pity. It's been illuminating to see how dramatically differently Three Kingdoms can play out depending on your starting faction. That's not completely new to Total War, but Three Kingdoms is by far the most character-focused game in the series, and the personality it injects into each faction is its greatest strength.

I won a nearly impossible battle against an army double my size by sending Sun Jian himself onto the field to duel another faction leader, Yuan Shao, and killing him at the very beginning of the fight. His army never recovered from the morale hit. I also infiltrated a spy into Yuan Shao's army, but was so determined to win that battle I inadvertently killed my spy in combat, too. So, that's a thing that can happen.

Like all Total War games, Three Kingdoms can be a bit messy. There's so much UI to keep track of when you're outside of the stellar combat. Managing the economy or sussing out how to properly arrange my faction's government or bargain with other leaders is never as intuitive or focused as it is in some other 4X games. But Three Kingdoms has made some big strides, and it's refreshing to experience the little narratives that come out of these personality clashes, without the crud of old Total War (spies were the worst) slowing things down. Every faction that asks to marry my warrior daughter, making her a member of their house, in exchange for a lousy pile of gold: she'll see you on the battlefield.

Fraser: Shogun 2, formerly the best historical Total War game, has been deposed. I put the 'historical' caveat there because my heart still belongs to Warhammer, but so much of that is down to setting and character. Three Kingdoms has everything else, and it’s still blessed with a great setting and an abundance of personality. The campaign, battles, diplomacy—they’re all the best they’ve ever been. The last one in particular seemed like a lost cause, but no, Three Kingdoms finally made interacting with other factions outside of combat engaging. It’s a miracle.

When diplomacy fails and fights kick off, they straddle the line between historical and fantasy Total War brawls. You’ve got grounded, historical units with swords and spears and not a magical weapon among them, but then you’ve got heroes, who do get special weapons, along with flashy abilities and superhuman strength. They can change the course of a battle just on their lonesome, as long as they don’t get defeated by another hero in a duel. They’re even more powerful, arguably, than their Warhammer counterparts, and make battles more dynamic and even more entertaining to watch.

Tom: The heroes are a big new addition to CA's historical Total War series, especially on the battlefield. I'm glad that the rest of the combat has remained quite straightforward. The interplay of swordsmen, spearmen, and cavalry is such an integral part of Total War combat for me, it's satisfying to slip back into old Total War habits without having to learn a bunch of new unit types. The RTS element of Total War has always excelled at delivering the spectacle of a vast, important battle, but that doesn't mean that combat has to be especially complicated. Spears beat horses; swords beat spears; flaming arrows are great; heavy cavalry beats almost everything. That's the law of Total War, and that forms the core of Three Kingdoms' magnificent real time scraps. I don't even need campaign mode, I'll happily boot up the game for a massive skirmish to enjoy the splendid unit design and animation work.