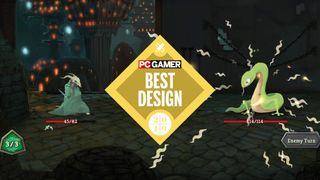 Turn-based roguelike Slay the Spire wins our Best Design award for 2019 thanks to the many revelations offered by its intricate deckbuilding. We'll be updating our GOTY 2019 hub with new awards and personal picks throughout December.

Evan: Walking in the footsteps of other PC Gamer GOTYs of yore (Into the Breach, FTL, Spelunky), Slay the Spire is a series of difficult, pleasant epiphanies that you acquire through failure. Oh, relics might be more important than cards. And huh, maybe removing cards is just as important as adding them. I'm starting to think block is more important than damage. Wait, this boss isn't the real end boss? A lot is owed to how transparent Slay the Spire makes information and enemy intents, which stacks some certainty into each shuffle.

Tyler: I love that it's not just about getting to the last fight. You have to be godlike enough to live through it. I take a lot of risks during each run, because I know it's all for nothing if I limp up to the final boss (the real final boss) with anything less than combos that make angels weep. Every decision I make is about that final encounter. I'll take on an early boss fight with 15 HP to my name if I don't think healing is the right thing to do in the long run, and the delayed gratification when high risk choices I made floors earlier pay off is sweeter for the wait.

Wes: That feeling when, after stacking buff after buff, you channel an entire maxed out arsenal of lightning orbs as Defect, and watch the bolts smash down one at a time for a boss's entire health bar. Damn, it feels so good.

Evan: I think there's two things at work there, Wes: the lively, concussive sound design of those lightning strikes, ice avalanches, a dozen overlapping knife pokes, or, my personal favorite, poison canisters that bounce like a sing-along ball between enemies, dousing them in toxin. But secondly: for how many games are about power accumulation, surprisingly few manage to allow you to achieve that feeling of outsmarting the game's systems. Slay the Spire invites you to beat it by breaking it. Sometimes this means stumbling on an infinitely-looping build, like pairing Unceasing Top ("Whenever you have no cards in hand, draw a card") with cards that allow you to discard your hand. Evident in the whole experience is the depth of understanding that the game's designers have for the deckbuilding and roguelike genres. It isn't a coincidence that one of these designers, Anthony Giovannetti, runs the largest Netrunner fansite on the internet.

Wes: I still haven't managed to beat the true final boss, though I've gotten quite close more than once. I think my weakness in games like this is taking too many cards, as I see the potential in a dozen different card combinations stretch out before me. Focusing makes all the difference. But I really admire how many viable ways there are to build each character once you throw in relics and the randomness of a run. My only real criticism is that some playstyles work splendidly until you run up against that one enemy or boss that is all but immune, ending two hours of build-up in an instant. I admit this may actually say more about my decks than the game itself.

Chris: Speaking as someone who doesn't typically play card games, I'm so impressed at how easy it is for a complete newbie like me to grasp the essentials and immediately start having fun—while also getting a sense of the depth of the design. Slay the Spire is also incredibly mod friendly which means players have been adding characters, cards, and even entirely new rulesets, making it even more replayable than it already is.

Evan: And even if you never touch that stuff, the main mode of play is plenty to chew on. After beating it with all three archetypes, I felt like I'd earned genuine merit badges—I couldn't wait to pin them to my Steam profile. It feels special to be one of only 5.3% of players to earn "The End?"