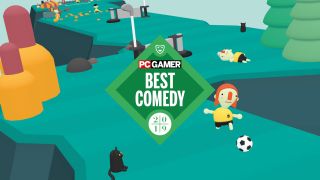 Merry Christmas! If you're looking for a distraction from opening presents and gorging on pork treats wrapped in other, thinner pork treats, here's our pick for 2019's Best Comedy, the oft-surprising What the Golf? We'll be updating our GOTY 2019 hub with new awards and personal picks throughout December.

Chris: Laughter is often the result of surprise, and there are few games quite as surprising as What the Golf? Each hole of What the Golf? has three stages, and each stage gives developer Triband another chance to surprise you. That structure itself is a surprise, because the stages don't always (or even usually) get progressively more difficult but are instead geared for comedy twists.

In stage one, maybe you shoot an arrow at a target (note: What the Golf? is very rarely actually golf but can include archery, bowling, horseback riding, racing, and even first-person shooting). In stage two, instead of a single arrow a torrent of them bursts from your bow to litter your target—weirdly making it a challenge to miss rather than hit. In stage three, maybe you draw back the bowstring and instead of an arrow, your little archer goes sailing through the air instead. You never know what the hell is going to happen in What the Golf?, and that in itself is funny. Most holes are brief to solve, and there's a different (and often funny) celebratory message after each stage of each hole, meaning the gags and laughs stack up at a ridiculous pace.

Harry: The anarchic splendour of What the Golf? is designed to be shared. From the main menu you can select a mode which is essentially a potted elevator pitch. The meta level that connects each three-part hole is dispensed with in favour of consecutive highlights, which is perfect for showing a friend the unbridled joyfulness of not golf.

In my experience the game only needs a couple of minutes to get someone chortling. It starts by lulling them into a false sense of security: the first level simply requires you to stick the ball in the hole. So far, so traditional. But, as soon as your ragdoll avatar is unceremoniously flung towards the flag in a later hole, rather than the ball, the person you're introducing to What the Golf? immediately knows what the game is all about: having fun for its own sake.

James: What the Golf? Is so consistently surprising and subversive I wouldn't have been mad if the final level slingshotted my computer out the window.

Harry: Sometimes I felt I would be catapulted from my window. I dug a hole shaped like the number one outside, just in case.

Rachel: I played many, many flash games back in the day during IT lessons when I was supposed to be learning about Excel spreadsheets, and What the Golf? captures the silliness and fun of that time in gaming. It's humour is all about subversion of expectations, and focusing on something as simple as a ball going into a hole leaves plenty to subvert. What the Golf? can sit comfortably beside Untitled Goose Game as a comedy best played on a couch with a group of friends as you launch your golf ball at a cute, innocent cow only to have it explode on impact.

Phil: Jokes on you, Rachel. The PC Gamer team has a lot of spreadsheets to tackle.