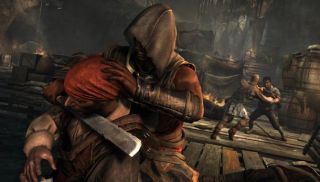 There's something eerily fitting about the first few moments of this AC4 DLC trailer, as ex-slave Adewale talks about freedom while a YouTube annotation informs you of the "#AC4blackflag" Twitter hashtag. It speaks to the dichotomy at the heart of the series, in which well-researched recreations of history clash against past-future wizards, technomagic video games, and Nolan North. Oh, and there's stabbing too.

[Update] Freedom Cry will be released for PC "in the coming days." Here's the official statement from Ubisoft: "The PC version of the Freedom Cry DLC for Assassin's Creed IV Black Flag will release in the coming days. We are taking the extra time to apply a final layer of polish to ensure that it meets the expectations of our fans."