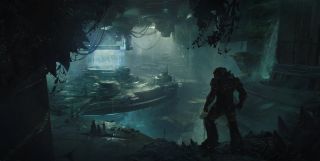 Anthem's next update, 1.1.0, is set to go live later today, introducing the new Sunken Cell stronghold, as well as other fixes and improvements that will be detailed in patch notes due to appear soon.

The game will be down for maintenance until 6 pm BST/10 am PST, and you'll be able to download the update when the servers are back up.

So what's the deal with The Sunken Cell, then? It's underground, it looks damp and maybe it's a prison? Concept art only tells us so much, but it won't be a mystery for much longer. BioWare will be showing off the new stronghold in a livestream on Twitch at 9 pm BST/ 1 pm PST, though you'll be able to play before then.

Here's the full patch notes for the 1.1.0 release: