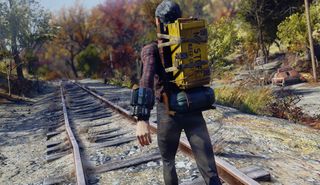 A hack has been causing issues for some Fallout 76 players, who have unexpectedly found themselves stripped down to their underwear while another player runs off with their items. There wasn't much anyone could do when targeted by the hack, though Bethesda claims only a small number of players have been affected and the exploit has now been fixed.

The sneaky hack, which players were warned about on Reddit, let cheating players strip their fellow survivors of items. Aside from caps, scrip and a few other things, it apparently made your entire inventory vulnerable. A player also uploaded a video of themselves doing the deed, rendering their victims confused and nude.

With nothing players are able to do, and with Bethesda apparently unable to restore stolen items, the Reddit post suggested that people shouldn't risk using public servers. Unfortunately, that wasn't really an option for people unless they were invited into a private server by a subscriber.

Last night, Bethesda addressed the issue, updating players and promising that a solution was imminent. It acknowledged the severity of the hack, though it also said it just allowed players to steal equipped items.

"We are investigating reports of a PC-only exploit that could be abused by cheaters, which may have resulted in a few players losing items that their characters had equipped," Bethesda said. "We have been actively working toward a solution for this and have a fix that we are currently evaluating for release today."

Since then, Fallout 76 has undergone maintenance on PC to shore up the game and deal with the exploit. Players who have been robbed have been told to contact the support team and Bethesda is looking into ways to compensate players. If it isn't able to return the items, perhaps some currency could be offered instead, though Bethesda hasn't specified any options.