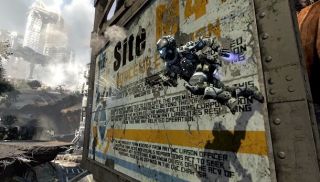 People in walking, jet-boosting tanks tend to attract a lot of attention, but what of the industrious men and women who make sure that tank doesn't blow a gasket the second you turn the ignition? Don't they deserve to say at least a few words before fleeing from my path of carnage and mayhem? In the behind-the-scenes video shown at EA's press conference, Respawn's devs take the chance to explain their creation.

The team at Respawn pitches Titanfall as a fusion of a single-player's narrative elements and the shenanigans only multiplayer can achieve. Speaking with GamesIndustry International , Respawn co-founder Vince Zampella was candid about his team's limited resources, saying it simply didn't have the time or money to create a costly campaign that not enough people will play.

A multiplayer mode with narrative elements certainly sounds promising, and you can see some of what Respawn is talking about in the debut trailer . Titanfall lands next spring.