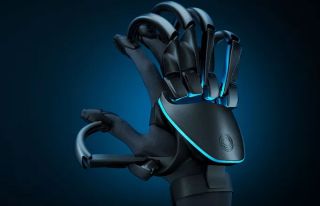 For the most part, virtual reality experiences have focused on the sense of sight, which is obviously the proper starting place. As VR becomes more popular, though, companies are finding ways to make these experiences more immersive. That's where Teslasuit and its new VR glove come into play.

The "Teslasuit Glove," as it's called, combines several different technologies to detect hand and finger movements, and provide various types of feedback to simulate the sense of touch. Each fingertip, for example, is equipped with a 3x3 haptic display, "enabling users to feel virtual textures naturally."

These sensors work in conjunction with motion capture and force feedback, which combine to offer spatial, resistance, and vibration effects as well. There's even an integrated biometric system to track a user's "emotional state, stress level, and heart rate."

The glove is not specifically designed for gaming, though I could see it being used in that capacity. Initially, though, Teslasuit is targeting "robotic tele-control systems as well as medical rehabilitation." I could see this being used in a variety of situations, including exposure therapy. VR is already being employed in that capacity—researchers have been leveraging VR to treat people with arachnophobia, the fear of spiders.

"There is evidence that computer generated virtual reality is as effective or almost as effective as [live] treatment for anxiety disorders," Emily Carl, a Ph.D. student at the University of Texas at Austin, told Spectrum IEEE. "But you run the risk of it not being quite real and that being distracting."

Imagine not only 'seeing' a big hairy tarantula crawl into your hand, but 'feeling' its legs and weight. If your heart rate spikes too high, the glove could send a signal to vanish the spider.

Teslasuit doesn't mention these kinds of scenarios, but it's not a stretch to see a VR glove going in that direction. It wouldn't just have to be for exposure therapy, either. Gaming could certainly benefit from something like this, depending on the creativity of developers.

One thing is for sure, we've come a long way from the days NES Power Glove.