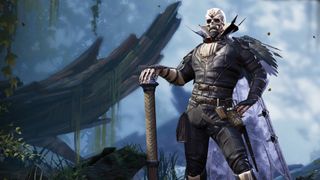 One of the stretch goals for the Divinity 2 Kickstarter was adding undead to the game, and boy am I glad the backers made it happen. I always enjoy playing RPGs as races or characters that shake the game’s systems up a bit, and that’s exactly what being an undead does. There are some downsides, sure. It wouldn’t be any fun otherwise. But here are a few reasons why I think you should ignore them and embrace the void.

Of course, there’s a downside to this. Folk in Rivellon don’t take kindly to the undead, which means showing your face in public will result in people fleeing in terror and the guards aggressively attacking you. So you’ll have to keep that lovely grinning skull, as well as your bony arms and legs, covered up with armour when you’re visiting a town. A small price to pay.

You can steal faces

While a simple cowl or helm will do a good enough job of hiding your skeletal face from suspicious guards and townsfolk, undead characters can take things a step further. A charming device called a faceripper can be found early in the game in Fort Joy, which you can use to harvest people’s faces and—with a little help from a magic mask—shapeshift into them.

Being able to switch races on the fly like this has a few interesting applications. It lets you access race-specific dialogue that would otherwise be blocked off to your character. And you can even take on the skills of the race you’re masquerading as, such as an elf’s ability to relive past events by devouring old body parts. And they say the undead are weird.

You can still choose your race

Being undead doesn’t limit your character creation options. You can choose which variety of skeleton you want to be, and some of them look amazing—particularly the undead lizard. The same rules apply for all of them, but it’s nice that choosing this path doesn’t completely restrict how your character looks.

Conceived by legendary RPG scribe Chris Avellone, Fane is one of Divinity 2’s origin heroes. These premade characters get their own backstory, quests, and dialogue options, and although you can recruit them all while playing as a custom character, getting to play as one (especially Fane) is pretty cool.

Fane is, of course, undead, and he has an enjoyably cynical view of the fleshy world of the living. His unique dialogue options—combined with those gained from being undead and shapeshifting—mean he’s a great choice for any player chiefly interested in storytelling and talking to people.

You can pick locks with your finger

When you play as an undead your finger becomes a literal skeleton key, and you can merrily pick locks without worrying about how many lockpicks you have left. Your thievery skill still needs to be high to unlock tougher doors, of course, but that’s one less consumable to worry about.

Items and spells that would heal a normal character in Divinity 2 will damage an undead one. That isn’t ideal, admittedly. But you can actually heal yourself with poison—further proof that it’s the coolest race in the game. You can drink the stuff as you would a potion or cast something like Contamination, a geomancer skill, and soak up the lovely healing badness.

You get new dialogue options

If you love talking to people in RPGs, then here’s another reason to play as an undead. Your unique perspective on life (and your lack thereof) adds additional dialogue options to conversations that you wouldn’t have access to otherwise.

Some are profound, like comforting a dying woman by telling her that death isn’t the end. But most are just funny, like warning someone you’re about to shake hands with that there isn’t much there to shake. Divinity is a light-hearted game, and being undead is the source of a lot of great gallows humour.