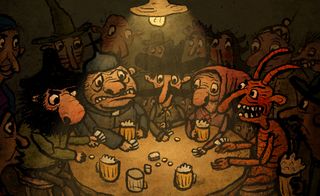 Every year it can be difficult to cut through the noise of PC gaming's biggest and loudest new releases to find the smaller, less-hyped games that deserve just as much of your attention. Indie games are constantly pushing boundaries and delighting us with inventive, thoughtful, and memorable experiences without the massive budgets and huge development teams that the biggest games on PC enjoy.

And 2019 was no different! We played and loved lots of spectacular indie games this year, so we've put together a list of the ones you should check out if you missed them.

Skeleton Business | Puzzle | Steam, itch| Recommended by James
Vignettes is a low intensity puzzle game where tricks of perspective turns objects into entirely new things. You rotate each of the colorful items around in space until you find the next object emerging. From the correct angle a telephone becomes a bowl which then turns into the shade of a lamp. Some items have little interactions hidden as well like a fire hydrant spraying water or a cat peeping out of a trash can if you remove its lid. It's a relaxing set of puzzles that don't take too much squinting to solve and is backed up by a great soundtrack to boot.

Wiznwar | Pinball | Steam| Recommended by Wes
Demon's Tilt both is and isn't a digital pinball game. It looks a lot like a pinball table aside from it's very tall design and it plays a lot like one too, but with teleporter portals and glowing pink bullet hell sprays. It just moved from Early Access to full release in December this year and is worth jumping into for the first time. Stereotypically game-y enemies like wolves and warlocks will assail you as you shoot for a high score alongside a stellar soundtrack.

Adamgryu | Adventure | Steam, itch| Recommended by Lauren
Yet another indie game about flying, A Short Hike takes its main character Claire on a trek to the top of Hawke Peak. She can glide downwards but not fly straight up the mountain so she gets to know the park and its other visitors on her way up. A Short Hike plays like a classic adventure game in that Claire is constantly helping other characters with their needs by finding and delivering items to them found in her small adventure. There are treasures to unearth, fish to catch, and minigames to play as you learn the ins and outs of the pixelated little park.

New World Interactive | FPS | Steam| Recommended by Evan
We originally loved Insurgency: Sandstorm for its commitment to real warfare over heroic drama when it released in late 2018. Since then, it has continued to evolve through 2019 with the addition of new guns, maps, and multiplayer modes. Even if you played Sandstorm at launch, it's worth going back to check out the new tug-of-war style PvP Frontline mode. Night maps, mod support, and more game modes are planned for 2020.

Mountain Sheep | RPG | Steam| Recommended by Chris
Here's just a few of the strange things I've done in RPG Hardland: I used the corpse of a deceased, rotund goblin king as a hamster wheel, I tried to feed an enormous birthday cake to a sacrificial altar, and I met some aliens named "Throat" and "Womb" at the bottom of a well. It's a surreal RPG in a beautiful, dreamlike world of cryptic elves, cagey wizards, talking pumpkins, and menacing monsters. I still haven't quite figured it all out, but it's one of the most interesting game worlds I've ever visited.

Breadcrumbs Interactive | RPG | Epic| Recommended by Chris
Ivan is one-handed blacksmith having a rough day. He's got to appease his angry king and nagging grandmother, and scour the world in search of both treasure and a bride. The monsters in this action RPG are inspired by folklore, the fantastic soundtrack is supplied by Romanian hip-hop band Subcarpați and composer Argatu, and the artwork is beautifully done. Branching dialogue lets you shape the character of Ivan into a hero or scoundrel, and rougelike elements keep things fresh when replaying.

Twirlbound | RPG | Steam| Recommended by Chris
Third-person open world adventure Pine has a bit of a Zelda-like feel. Your young character, Hue, leaves the safety of a secluded mountaintop and wades into the turmoil of warring factions in the world below. You can take over villages by force or espionage, or attempt to befriend the various tribes by doing them favors, while undertaking quests in a sprawling and beautiful world. The combat is challenging—hacking and slashing won't get you far and you'll need to rely on patient dodging, blocking, and staggering your opponents when the moment is right.

Amanita Design | Adventure | Steam, itch| Recommended by Chris
The makers of Samorost and Machinarium quietly released another quirky adventure game this year, and it's just as charming and oddly beautiful as you'd expect. As you explore the unusual world, you gather a deck of characters and items, each represented as a card you can play in the situations you encounter. Even if the cards you play don't solve a particular puzzle, you're still treated to some wonderful and amusing animations, making it a lot of fun to experiment. Using a lasso on a bear or feeding worm soup to a witch might not lead to progress, but it's still enjoyable to watch. It's a short, sweet, and delightful adventure.

Auroch Digital | Strategy | Steam| Recommended by Jody
This tactical car combat game set in an alternate universe has themes that will likely remind you in equal parts of Mad Max and Fallout. In this apocalyptic other United States, your kitted out car covered with guns is your tool for a number of missions on the cross-country highways. Your procedurally generated missions will set goals like hacking into cars while driving alongside them, blowing up tanker trucks, and of course an escort mission or two. In a slow-mo mode you can give out tactical commands to your own car and sidekick to do things like drop road spikes or lock machine gun turrets on to a new target.

Samurai Punk | Exploration | Steam, itch| Recommended by Jody
Feather is a relaxing game experience about soaring around an island as a bird. It's entirely not the kind of thing you'd expect from the developers who previously made the multiplayer FPS Screencheat and the VR game about doing ordinary life tasks by shooting stuff with guns. In Feather, your goal is just to enjoy the sensation of flight. There's no winning or losing and although you can set arbitrary goals for yourself like threading the needle through various hoops, you're better off just sitting back and enjoying the scenery. There are small environmental secrets to find and an ambient multiplayer system akin to Journey to keep you entertained as you fly around the island.

James Patton | Simulation | Steam, itch| Recommended by Jody
It's occasionally good to be bad, and instead of fighting oppressive corporations in typical cyberpunk style, Spinnortality has you start an immoral company of your own. Each turn of three weeks has you tactically deciding how to best grow your business. You may need to invest in corporate espionage, silencing media critique of worker suppression, and launching various dystopian products to the public. The early goal of the evil boss simulator is developing tech to make yourself immortal so you can continue extending your influence forever.

Klei Entertainment | Deck building | Epic| Recommended by Jody
In an interesting case of pivoting early, Griftlands became a deck-building rogue-like game instead of the open world RPG it was originally announced as. Despite the switch, Griftlands made turned out to be a solid deck-builder with interesting choices when it showed up in early access. Everything from fights to negotiations is handled with its own deck that can have helpful or disastrous cards added to the rotation based on your previous choices. It will still be in early access for a while yet where you can play through the campaign as Sal the bounty hunter before additional characters are added.

Slothwerks | Deck builder | Steam| Recommended by Rachel
Yet another member of this year's very specific genre of early access roguelike deck building games is the second Meteorfall game—the first on PC. Krummit's Tale is full of color both literally in its visual design and figuratively in its amusing flavor texts. Each dungeon shuffles together your cards with a deck of monsters and deals them into a three by three grid where you'll need to defeat every monster dealt before moving on. It's a cheeky and fun roguelike card game with just enough versatility to keep even less experienced players in the game.

Pillow Fight Games | Adventure | Steam, itch| Recommended by Rachel
In an alternate alligator universe version of New York City, Pat the alligator is out to solve a mystery. Over 100 hand drawn alligators inhabit the world of Later Alligator where each has their own silly charm and personality. It's a point and click style adventure full of secrets and minigames while you work out how to save Pat from landing in hot water.