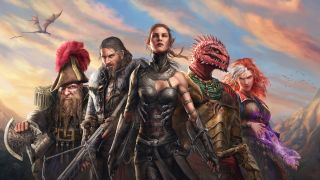 Divinity’s history has been defined by inextricable partnerships, from the chained-together protagonists of Beyond Divinity, to the demon that shares a head with Lohse—the fantasy equivalent of the nightmare flatmate. They’re a reflection of Larian’s own symbiotic relationship with the series, which has been its primary vehicle for pushing the RPG genre forward over two decades.

Now, though, the chains have loosened. With Larian understandably preoccupied by Baldur’s Gate 3, the next Divinity sequel won’t be an RPG. Instead it’ll be a tactical battler co-developed by Logic Artists, the Copenhagen studio behind the turn-based combat of Expeditions: Viking.

It’s tempting to mentally file any spin-off under ‘non-essential’—that new Baldur’s Gate won’t play itself, after all. But there’s reason to believe Fallen Heroes will be a fantastic tactics game, not least because there’s already one of those buried in Divinity: Original Sin 2, just waiting to be taken by the hand and persuaded into the spotlight.

You’ve probably scrolled past Arena mode numerous times on your way to the ‘Continue’ button. Such is the scope and grandeur of Original Sin 2’s campaign that you’d be forgiven for never touching its competitive multiplayer, but it’s every bit as accomplished as the story mode—a focused XCOM-like that bodes well for the new spin-off.

Part of the appeal of Fallen Heroes is that it throws together characters from the campaign, and Original Sin 2’s Arena mode offers a similar premise, but steers left into fan fiction. On the screen where you pick your fighters, Radeka the Witch can take up arms alongside Braccus Rex, who’s been dead for over 1,000 years. Canon feels a distant concern when he’s commanding the dead to reach up through the pools of blood that drench the battlefield, grabbing at your combatants’ legs.

Yet it’s Arena mode’s distance from the campaign that makes it such a strong companion piece. In the main game, your strategic options are limited by the NPCs you’ve managed to strongarm into service and the spellbooks you’ve bartered for. Here, you’re commanding a full toolbar of attacks and buffs tuned by the experts at Larian.

It’s a little like looking up a recommended deck in Hearthstone; once you see those abilities together, their complementary possibilities become clear. Erratic Wisp, for instance, can teleport the archer Ryker randomly every time he gets hit - perfect for providing distance from the big blokes with swords. The Arena is an advanced level teacher, covering the kind of combos that don’t come up in Larian’s tutorials.

It’s also the ideal environment in which to muck about with Original Sin’s elemental combat, which has always felt part magic, part science. The experienced spellcaster looks out over the battlefield and sees reactions waiting to happen—barrels filled with oil, begging for a fireball, and clouds of steam ripe for electrification. It’s experimental and irresponsible, like the work of early physicians and alchemists, and the results can be explosive.

These systems aren’t exclusive to competitive multiplayer. But taking them away from the wider concerns of the campaign frees you from worrying about whether or not to save your knockdown arrow for the next battle. In this contextless skirmish, the only fight that matters is the current one, and you get to throw everything at it.

By the same token, you don’t need to save your heroes for another day either. In Arena, you’re encouraged to sacrifice the pieces on your board if doing so enables eventual victory. Nowhere is that more true than in Kill the King, an option Larian added last year which designates a character on each team as a VIP. That unit becomes your queen, and the other fighters your pawns. A rogue might be terminally exposed when they leave cover, but if their backstab cuts a VIP’s health in half, the trade-off might be worth it.

The other highlight from last year’s revamp are mutators - dramatic changes that momentarily influence the entire arena. It’s not unusual to see every hero on the field simultaneously sprout wings for a turn, allowing them to flap safely over pools of bubbling acid, before Sudden Death reduces their health to almost nothing. It’s the principles of Worms applied to RPG combat—an everchanging map where not even the ground you stand on is a given.

The skill is in weathering the turbulence long enough to reverse a dire situation. Yes, a burning pit might be a disaster right now—but it’s just one blessing away from tickling at the victims caught in its blaze with healing flame.

By stripping away the dialogue, dungeon-delving and cheese-trading of the campaigns, Arena mode presents Divinity combat in its undiluted form and reveals its central characteristic: volatility. If Fallen Heroes follows the same formula, it’s going to be a game defined by lurching shifts in fortune and last-minute surprises—as gripping and dramatic as it is daft.