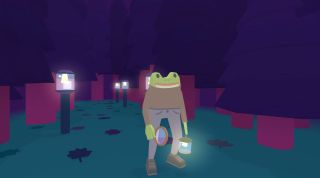 Superhot Team is getting into the publishing game, kind of. Superhot Presents, announced today, is a funding initiative designed to help indies who don't want or need a traditional publisher. The Frog Detective adventure game series and Knuckle Sandwich, a retro RPG, are the first to take advantage of the fund.

While Superhot Presents emphasises that it isn't a publisher, it's offering more than cash, promising business mentorship and advice. The main objective, though, is to inject money into indie development.

"Ultimately, Superhot was created for the fans, and they helped fund us when cash was tight," said Superhot's Callum Underwood. "Superhot Presents is our way of sharing with other developers the support we've had from our great community, we're now opening our war chest and providing starting or finishing funds to those that pique our interests. Not publishing, just funding with a side portion of advice."

Last year, Knuckle Sandwich smashed its Kickstarter goal in 12 hours, but the first time we played it was way back in 2015. It's a strange mix of turn-based combat, mini-games and inspirations as broad as Pokemon and Fargo. Developer Andrew Brophy has been working away on it for years, but maybe the cash boost will nudge it closer to release.

Superhot Presents isn't looking for pitches from developers, apparently, but it invites devs to send "spicy gameplay gifs" on Twitter.