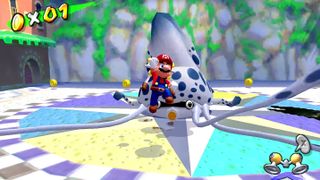 One of the benefits of working for PC Gamer is I get to avoid endlessly reporting about which games can run at 1080p 60fps. The answer, by and large, is all of them. In fact, thanks to some new hacks for GameCube (and Wii) emulator Dolphin, even games that categorically should not be able to run at 60fps now can.

Here's a video of Super Mario Sunshine running smoother than it's ever run before. (Be sure to use Chrome to see it in full 60fps glory.)

Dolphin's JMC47 posted about the emulator modification, and provided instructions on how to get it working. And Super Mario Sunshine isn't the only game to benefit from a 60fps option. Here's a video of an equally smooth Pikmin 2:

For more on Dolphin, see Wes's expansive feature on its creation. And remember: Dolphin itself is entirely legal, as none of its code belongs to Nintendo. Ripping your own games is legal in some countries, not in others. Downloading games is piracy, and totes not allowed.