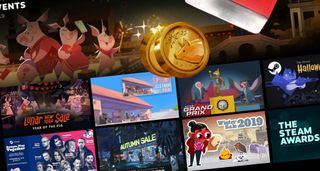 With 2020 now well underway, Valve has shared a look back at the "major updates and new features" that were added to Steam throughout 2019. It was a big year: More new games "found success" on Steam in 2019 than in 2018, according to the Year in Review blog post, and median earnings among new releases went up too. Monthly active users grew to nearly 95 million, and despite the occasional perception that Steam sales aren't the big deal they used to be, "2019 finished strong with our most successful sale ever."

Much of the post is dedicated to things we've covered previously, like the launch of Steam Labs and the "experiments" to emerge from it, like Micro Trailers, the Interactive Recommender, and Community Recommendations, and the Big Library Update, a major cosmetic overhaul that also added a significant number of new features including better sorting options, custom "shelves," and improved game pages.

There are some interesting bits of trivia, too. Nearly 21 billion hours of game time were played on Steam last year, 4.3 million items were uploaded to the Steam Workshop (including some "fake items" used to hijack accounts that forced the introduction of new verification steps), 44 review bombs were addressed, and over the final two months of the year, 3.7 million people used Remote Play, and 2.3 million used Remote Play Together.

It's a thorough overview of Steam's evolution over the course of the year, and worth diving into if you're interested in the nuts-and-bolts of how it all works. Maybe more interesting, though, is a look ahead at Valve's plans for Steam in 2020:

Steam sale events could be fun, but what I'm really looking forward to are the "deep data dives." It might be more relevant to my specific interests than to gamers in general, but something along the lines of an "official" SteamSpy (which, admittedly, this doesn't really sound like, but I live in hope) would be very useful.

Valve is also working improvements planned for Steam TV, chat, the library, the Steam Store, and other features, plus "more projects that we're not quite ready to talk about just yet." We can expect to learn more about all that over the course of the year.