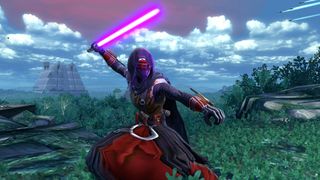 A lot of pretty great Star Wars characters and stories were tossed out after Disney swallowed up Lucasfilm and streamlined the messy galaxy's history. Most of what wasn't in the films was placed in the non-canon pile, including Knights of the Old Republic, but as of Rise of Skywalker, Revan has at last been put back into the history books.

First spotted by Screenrant, the Rise of Skywalker Visual Dictionary makes references to the old Sith lord, including hints that Luke actually got his hands on a broken lightsaber crystal belonging to a Jedi Crusader, another name for the renegade Jedi who followed Revan when he went off to batter the Mandalorians.

The book also reveals that the Sith Trooper legions, which look very cool but we learn absolutely nothing about in the movie, are named after famous Sith, including Revan. The full list is Anededdu, Desolous, Phobos, Revan, Tanis and Tenebrous. Yep, they sure sound like Sith.

Revan isn't the only character drawn from a game, either. Phobos and Desolous were both created for Force Unleashed and ended up being defeated by Starkiller. Naming your legions after a bunch of losers doesn't inspire much confidence.

With three games, one of them ongoing, and two comics, there's still a lot from The Old Republic era that presumably hasn't been added back into Star Wars canon, but Revan isn't the first thing to return. In Star Wars: Rebels, the planet of Malachor crops up, originally introduced in Knights of the Old Republic 2.

The status of the MMO is less clear. Disney said that everything Star Wars-related going forward would be canon, and new characters and stories have been added to The Old Republic since then. It's all a bit confusing, which is the opposite of what Disney was trying to achieve.