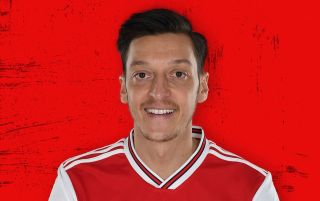 Arsenal star Mesut Ozil caused a stir last week when he criticized the alleged ongoing human rights abuses and persecution of Uighur Muslims by the Chinese government, and the failure of Muslims globally to adequately respond. As translated by The Guardian, he wrote, "[In China] Qurans are burned, mosques were closed down, Islamic theological schools, madrasas were banned, religious scholars were killed one by one. Despite all this, Muslims stay quiet."

The tweet sparked a backlash among Chinese Arsenal fans, and Arsenal's predictable effort to distance itself from its player—"As a football club, Arsenal has always adhered to the principle of not involving itself in politics"—failed to calm the outrage. Angry comments were posted, jerseys were burned, and China's state broadcaster canceled a planned airing of a game between Arsenal and Manchester City.

Now the backlash has also spread to videogames, as Ozil has reportedly been cut from PES 2020 in China. According to the BBC, publisher Netease has removed Ozil from all three editions of the game available in China, saying in a statement that his comments "hurt the feelings of Chinese fans and violated the sport's spirit of love and peace. We do not understand, accept or forgive this."

Earlier this year, 23 nations including the US, UK, Canada, France, Germany, and Japan issued a joint statement at the United Nations condemning the Chinese government's detention and mistreatment of Uighurs and other Muslims in camps in the Xinjiang province. Shortly after that, Belarus issued a statement on behalf of 54 nations, including Russia, Egypt, Bolivia, and Serbia, in support of China's "counter-terrorism" program, describing the detention camps as "vocational education and training centers."

US Secretary of State Mike Pompeo came out in explicit support of Ozil, saying on Twitter that "the truth will prevail."

China’s Communist Party propaganda outlets can censor @MesutOzil1088 and @Arsenal’s games all season long, but the truth will prevail. The CCP can’t hide its gross #HumanRights violations perpetrated against Uighurs and other religious faiths from the world.December 17, 2019

The reaction to Ozil's criticism reflects an increased willingness by China's game industry to flex its muscles in support of the government, as seen previously in response to expressions of support for Hong Kong from Hearthstone grandmaster Chung "blitzchung" Ng Wai and Houston Rockets general manager Daryl Morey.

In both cases, corporate interests moved quickly to mollify Chinese audiences—Blizzard suspended Blitzchung and two casters involved in the incident, while the NBA issued a de facto apology on Morey's behalf—and as grotesque as it is, it's not hard to understand why: As we said in October, the Chinese market is simply "too lucrative to piss off."

And while cutting a real person from a videogame because they were critical of the Chinese government feels like an escalation, it's not at all out of character: China actively censors videogames and other forms of entertainment media, and maintains policies that ensure foreign companies can do very little about it.

Somewhat oddly, given his apparent support for human rights, Ozil is also a known supporter of Turkish president Recep Tayyip Erdogan, who has imposed an increasingly authoritarian regime on the nation since becoming president in 2014 and recently launched an ethnic cleansing campaign of his own against Kurds in Syria. Erdogan actually served as a witness at Ozil's wedding earlier this year; Helge Braun, chief of staff of German Chancellor Angela Merkel (Ozil is German), said Erdogan's presence as a witness "makes one sad."

A Konami rep declined to comment on Ozil's removal from PES 2020 in China. I've reached out to Netease for more information, and will update if I receive a reply. Resident Arsenal fan Tim Clark would also like to hear Ozil's thoughts on why the team's season currently resembles a slow motion shuttle crash, but alas we are out of time.