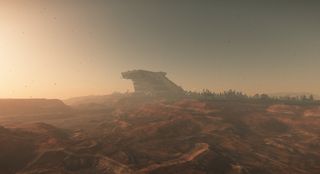 In celebration of its anniversary, Star Citizen will be free for everyone next week. From November 23 to November 30, you’ll be able to flit around in the alpha, getting into trouble in space or exploring Hurston; that's the sim’s very first planet, also launching next week. The extended free period means you’ll have more time to fly every single ship in the game—they’re all going to be free for 24 hours, rotating daily.

Hurston was revealed back at Citizen 2018, in October. Chris Roberts walked the audience through the hub city of Lorville and then out into the wilderness, by foot and ship. The city in particular is striking, and Roberts boasts quite a bit about the AI NPCs that make it a “living, breathing place”, just like every other open world a developer has ever described. It does look impressive, though, and just like everything Roberts gets on stage to show off, extremely ambitious. Take the tour below.

This seems like a big enough milestone to warrant a return, if you’ve not had the itch for a while, or a first look. I’m a sucker for a good sci-fi city, and while Roberts was showing it off last month, it was the first time in ages where I desperately wanted to hop in a ship and explore.

As well as Hurston and every ship being made available, free players will also be able to check out the features introduced in the last big update, including the face-tracking stuff that translates what your camera sees to your characters face, matching facial expressions. It’s a bit uncanny and creepy, so not really a plus for me, but hey, maybe you’re into it. You’ll also get to go on the new scramble race missions, where you have to hoof it across a planet.