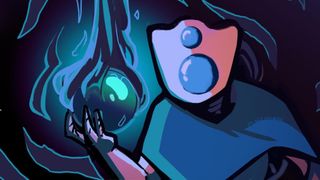 Heroes in Slay the Spire are themed card decks full of powers unique to that character. So far we've had a swordmaster who specialises in using strength to hit goblins real hard, and a sneaky assassin who enjoys poisoning enemies. They have just been outdone by The Defect, a magic robot that uses floating elemental orbs to blow up goblins with lightning storms.

The Defect is the third and final one to be added before the game leaves Early Access and takes over the world. If you have the game you can play as him by right-clicking on Slay the Spire and selecting the beta branch from the beta tab in the properties menu. I would highly recommend doing this, because the orb system is a whole resource management game hiding inside a card combat game. I can't think of anything else quite like it.

The Defect starts with a set of basic attack and block cards, but you want to get rid of those as quickly as possible so you can fill your deck with cards that summon and activate orbs. At the start of a run you have three empty orb slots that hover around the robot's head. Cards fill those slots with elemental force that performs a passive effect at the end of every turn—frost orbs give you a couple of points of block; lightning zaps a random enemy for three damage; plasma gives you extra energy so you can play more cards in a turn.

You can also use cards to spend the orb at the front of the queue to perform a more powerful one-shot effect. A lightning orb will zap a random enemy for extra damage, for example, and an activated frost orb will give you extra block. Once your deck starts working efficiently the Defect can cycle through multiple orbs in a turn, summoning a rainbow of elemental effects and converting them into damage and defence on the fly. Slay the Spire has fairly basic art, but moving these glittering balls of energy around is satisfying and surprisingly beautiful.

The system creates an entirely new way for cards to interact with the battlefield. Normally you play cards directly on yourself or your enemies, but the orbs are a third zone that you can grow and shrink in each battle. There are cards that increase and decrease the number of orb slots floating above your head (I haven't found the limit to the number you can have, but I will). Beyond standard attack/defence orbs like lightning and frost, there is a rare 'dark' element that powers up each turn it hovers in orb form, which means you're suddenly thinking about holding the orb queue until they are powered up enough to do serious damage. It feels like juggling grenades.

I've only played around with the new character for a few hours, but I can already see some potential builds. There is a resource that improves the passive effects of your orbs, so suddenly those lightning orbs are dealing seven damage to a random enemy each turn rather than three. If you can get five or six lightning orbs into the air, that's a lot of ongoing automatic damage every turn. I also like the way you can manipulate the orb collection to play more defensively in the right situation. If I'm expecting a big punch in a few turns I can start channeling lots of frost orbs to give myself a burst of block at the right moment.

He's already my favourite character, but the orb system does conflict with Slay the Spire's random card drops more awkwardly than the other classes. Some cards, like Capacitor (+1 orb slot), feel essential to The Defect's whole deal, and if you don't happen to drop them, or you pick them up late in the run, then it feels like you can't unlock the hero's true potential.

This is also the case for the other two classes, to an extent. If you are angling for a strength-heavy build and you don't get the right drops, that's just tough. These orb manipulation powers feel so integral to The Defect's style, however, that I wish a few of them were in the starting hand. The Defect's relic gives him an automatic lightning orb at the start of each fight. If you ask the magic whale to swap out your starting relic (all hail the whale) it really kneecaps the class.

The robot is still in beta, though, so balance is still being worked on. Right now there are some very powerful cards still in circulation on the beta branch—the card that causes your lightning orb strikes to target everyone is particularly tasty. I think I'll find it hard to go back to just hitting goblins like a norm with the Ironclad after this. The new deck is full of so many neat ideas, it bodes well for the heroes the team are planning to add after launch.

For more on Slay the Spire, check out our recent interview with the developers.