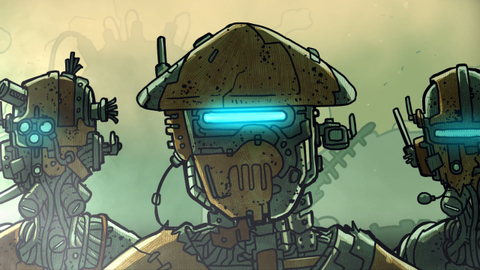 A punishing take on the Rogue-inspired genre, Bedlam is weird and colorful and stressful.

From inside my massive Dozer, I watch the wasteland roll by. A fortress on wheels, the Dozer supports thousands of passengers, a squad of security soldiers, supplies, and fast-growing vats of artificial meat supplies. It’s a brutal solution to a brutal problem: get these pilgrims across an apocalyptic desert and on to the paradise of Aztec City beyond.

Bedlam is a game about taking risks and making hard choices. As the overseer of the Dozer, everything has a cost. Stopping to speak with a curious band of travelers will cost fuel, food, and days on the road. Finding out that they’re insane robots with corrupted, violent programs will eventually cost my soldiers a dead comrade and several days in hospital. Choosing to drive past them would have lost me the opportunity to loot hundreds of gallons of precious crude oil.

It begins with a parade: the Dozer is leaving town and heading down the road to El Dorado. Looking down at a minimap, I choose a route along a winding, twisting road. After each leg, the map splits into several local diversions. These shorter roads don’t cost much to get to and always have a fight waiting at the end, but winning those fights gives the talented player a way to restock essentials like fuel, food, and power.

Along the way, NPC dialog and special encounters help flesh out the weird, Mad Max-ian fiction of Bedlam. I met mutants, seers, robots, cyborgs, bandits, and merchants—and only a few of those tried to kill me. I was eaten by giant sandworms and reinforced by wandering bands of refugees. Making a wasteland feel alive is tricky business—a wasteland is, by definition, a place where nothing lives—but Bedlam’s apocalypse is teeming with danger. The wonderful art is almost too colorful for a game set in the desert, and after several hours, I’m confident saying that Bedlam rocks my favorite soundtrack in any game since Bastion.

Some special events give you an opportunity to upgrade the Dozer, making it more fuel efficient, or cheaper to use. It speaks to Bedlam’s incredible balance that I reached the end many times, but I always barely limped over the finish line. Even on the easiest difficulty Bedlam wasn’t a stroll in the park. On harder difficulties, I never made it across at all.

There’s a second half to Bedlam, and I think it is the less successful half. Every fight that breaks out on the map screen is played out in an isometric grid. Squad members come in four classes, organized by weapon: sword, shotgun, pistol, and sniper rifle. These troops each specialize in different movement and firing ranges, and the resulting combat feels a little bit like chess, albeit heavily modified.

Snipers in particular have a narrow field of fire, so I usually had to move my sniper two squares up and one to the left to take a shot. Each side gets two actions per turn, so using a sniper meant committing all of a turn to take that single shot. In my recent preview I noted that the snipers weren’t powerful enough to make up for their fragility, and I’m happy to see that they now punch a lot harder. Particularly in the early game, distance shooters are your best chance to take down a bad guy fast. Snipers have gotten even easier to kill since the early builds, though, so they absolutely have to be protected.

Regardless of type, though, all of my soldiers are fragile. Casualties are to be expected, and that’s where Bedlam runs into the most trouble. I found it so completely impossible to escape from a battle unharmed—even when I enjoyed a total victory—that an empty barracks doomed my expedition more than any other cause. Bedlam provides warring incentives, forcing you to explore opportunities for supplies at the expense of a fragile, dwindling, and irreplaceable roster of doomed young people, and there’s no escaping it.

Bedlam’s combat reminds me of XCOM’s approach to brutal permadeath, but the comparison is not flattering for Bedlam. XCOM thrives on the sense of danger and loss that accompanies every conflict because, no matter how bad things get, there are always more recruits. A green recruit is an unskilled pain in the ass, sure, but the worldwide XCOM project doesn’t end because of an unlucky grenade throw. In Bedlam, there are no new recruits, and more than one trip through the wasteland ended because a momentary mistake wiped out my entire squad. For me, this is where Bedlam crossed the line from enjoyably brutal to stressful frustration.

In Bedlam, no matter what you do, you’re going to get screwed. When I did make it to the finish line, it was after an uncomfortably stressful trip that I stopped enjoying somewhere along the line. Bedlam is made of moments of relief and victory and tension and stress. Some people might stir that cocktail together and love the result. That kind of brutality can be appealing—the way Dark Souls is beloved for its challenge—and there’s no doubt Bedlam is a finely-crafted game with delicately balanced combat. But it's too menacing for me, and I am glad to be done sweating through it.

Winning a fight earns supplies, but picking up cases while the battle rages earns you more.

Clicking on an enemy shows their firing and movement range, so plan accordingly.

Defeating a special unit brings them onto your side.

A squad wipe kills soldiers, denies you supplies, and pretty much ends the game.

A punishing take on the Rogue-inspired genre, Bedlam is weird and colorful and stressful.