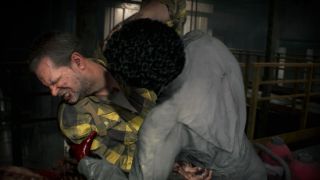 Free DLC is coming to Resident Evil 2 Remake starting in February, Capcom has confirmed. The Ghost Survivors is a trio of ‘what if’ stories following three other survivors of the Raccoon City outbreak. Leon and Claire aren’t the only people doing exciting things amid the zombie apocalypse.

No Time to Mourn, Runaway and Forgotten Soldier explore the survivor stories of the gunshop owner, the mayor’s daughter and the soldier, respectively. The first, No Time to Mourn, is due out on February 15.

Capcom has a mixed reputation when it comes to DLC. The Street Fighter series is particularly bad for it, but Monster Hunter: World, on the other hand, has enjoyed a whole year on PS4 and six months on PC of free updates and events, full new outfits, weapons and challenges. Hopefully, Resident Evil 2 will be more like the latter.

I don’t have any illusions that I’ll be finished with Leon and Claire’s stories before the DLC starts appearing. Resident Evil 2 isn’t a long game, unless you play it in 30 minute slices because that’s all your timid heart can handle. As I confessed in last week’s highs and lows, I’m much better at being zombie chow than a zombie slayer.

If you’re already hungry for another remake, Capcom hasn’t announced plans for Resident Evil 3, but the publisher is apparently open to it. Speaking to Game Watch (via Dualshockers), producer Yoshiaki Hirabayashi said Capcom remade Resident Evil 2 after years of fans asking for it, so they’ll need to ask for its successor just as emphatically.