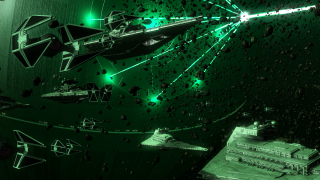 Last year, when we discovered the Star Wars Empire at War Remake mod, Fraser Brown requested to be frozen in carbonite until it was done. I guess we can thaw him out because I just checked the mod page and hot damn. Not only does this mod update the game to cutting-edge visual standards with new models and effects, it adds new units and deepens the game mechanics. The most recent release, the 3.0 update, brought a whole host of new stuff and graphical improvements to the mod. Empire at War is a strategy game released in 2006, and we still consider it to be one of the best space games on PC.

I’m a particular fan of this mod because of its philosophy: It doesn’t really muck with the core game experience or add too much new material, but it does rework what it needs to and adds (optional) much-needed difficulty. Empire at War Remake has also been given the Mod of the Year award by the ModDB community, surprising literally no-one. It won the same in 2018 as well. Here’s a bunch of pretty pictures of the mod in action:

You can get Star Wars Empire at War and its expansion, which you’ll need for the mod, pretty cheaply on Steam or GOG, just $6.99 for the winter sale. You can check out Empire at War Remake: Galactic Civil War on ModDB, or go straight to the 3.0 update. The mod community also has a Discord server.

Oh, I was going to thaw Fraser out. Maybe I will after a few hours of Empire at War...