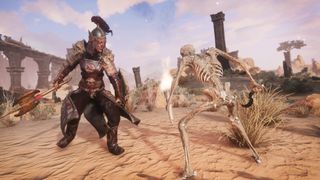 If you fancy spending the weekend surrounded by beefy barbarians—and who doesn't?—then you're in luck. Funcom's hosting a free weekend for all of its Conan games on Steam. Technically, there are three of them, though Age of Conan: Unchained has been free-to-play since 2011.

The Conan MMO was one of the best-looking games around when it launched (originally with a subscription) in 2008, and one of the bloodiest MMOs. It was far more story-driven than its contemporaries and had an unusual combat system, but I'm still surprised that it's managed to keep its head above water when so many other MMOs have vanished. It's already free, but the Hyborean Collector's Edition, which contains four expansions and a vanity item, is 60 percent off until September 30.

Conan Exiles is probably best known for its penis slider, but if you've ever wondered if the survival game has more to offer than big cocks, now's your chance to take a look. The solo experience is pretty dull—there's a reason nobody wrote a book about Conan building a house—but you can also band together with other players, fight in sieges and watch avatars of the gods smash up towns.

Finally, there's Petroglyph's survival RTS, Conan Unconquered. There's all the armies, building and resource management of your standard RTS, but instead of duking it out with other players or factions, you'll need to protect your city from the relentless attacks of Thurga Khotan and his army of bandits and monsters. There's also a co-op mode where you can team up with a mate to defend the city.