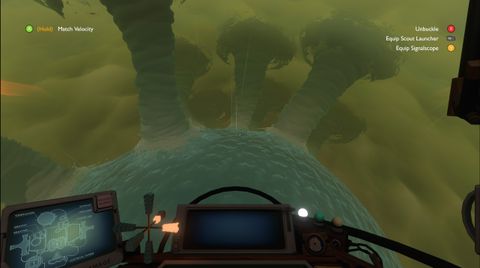 Beneath its charming and inventive worlds, Outer Wilds hides a cleverly unfolding mystery.

The sun has gone supernova. That's bad and all, but right now I'm actually more interested in some rocks. You see, I found a physics-defying obelisk that emits a specific, eerie noise. I wake up, jump in my ship, and use my signalscope to scan the solar system for matching sounds. I follow one to the planet of Brittle Hollow, but almost immediately get distracted by some interesting ruins. I land nearby and investigate. And then the sun blows up again.

I wake up, jump in my ship, and activate its log. A new entry appears for the ruins. There are rumours of other possible points of interest too. I'm trapped in a time loop. I've got about 20 minutes until the sun explodes once again. What can I discover this time?

Superficially, Outer Wilds is a first-person game about exploring a small solar system containing a handful of quirky planets full of weird and interesting phenomena. You fly to a planet, you look at some stuff, you die. You fly to a different planet, you look at some different stuff, you die. More significantly, though, Outer Wilds is a mystery sandbox. It reminds me a lot of Her Story or Return of the Obra Dinn, in that its solar system feels like a puzzle that I piece together by connecting small, often seemingly unrelated details.

You start each loop on your home planet of Timber Hearth. You're the latest astronaut for Outer Wilds Ventures—think NASA by way of the National Park Service. Their folksy aesthetic fits perfectly in a solar system where the distance between planets is measured in kilometres and the only inhabited settlement is a tiny village built into a crater. That charm is carried into your journey, too, from the design and handling of your spaceship, which is hardy enough to absorb a few rough landings, to the way you refill your air by standing near some trees.

There are a handful of Hearthian astronauts scattered around the system already—you can go and meet up with them if you like—but they're all content simply sitting by their campfires, cooking marshmallows and playing a jaunty tune on their favoured instrument. You, on the other hand, have been given a device that lets you translate the language of the Nomai—an ancient, technologically advanced species. You're sent out on a journey of discovery, and quickly realise there's much to unravel.

Hence why it's so easy to set the greater mysteries to one side. The death of the sun and the fact that you're seemingly the only person experiencing a time loop both feel like big, distant problems. But there's plenty of smaller threads to follow. Perhaps you land at a site simply because it looks interesting, and translate a note that mentions some other location. Later, you go looking for it, only to find that the entrance is blocked. You put that thread to one side—every discovery is stored on your computer for future reference—and go looking for something else. Then, many loops later, maybe on another planet entirely, an offhand reference causes inspiration to strike. "If this works like that, then maybe that…" And suddenly you're back on the case.

The time loop might feel like a gimmick, but it's central to Outer Wilds' thesis of exploration. It lets the planets act like living, moving environments that can change over time. The Hourglass Twins, for instance, are two planets connected by a giant column of sand. Over the course of the loop, the sand is transferred from Ash Twin to Ember Twin, filling in the canyons of one while revealing what hides under the surface of another. Each planet has something that makes it an immediately interesting space to explore, and often one that rewards repeat visits at different times through the loop.

More importantly, Outer Wilds understands that if everything physical resets, then what truly matters is the only thing that can be carried between loops: information. You can be confident that you won't need to go on some convoluted, multi-part quest, gathering multiple doohickeys to perform intricate operations across the solar system. There simply isn't time. While unlocking some of the biggest mysteries require a bit of planet hopping, it's always designed to fit within its fixed timeframe. As frustrating as it can be to hear the mournful dirge that signals the death of the sun before you've uncovered some new revelation, usually it just means that you haven't quite grasped the key concept or action needed to progress that thread. And it's balanced by the satisfaction of hearing that same tune play after having successfully put a pin in one of the game's major mysteries.

It helps that, when the sun's not blowing up, Outer Wilds is a nice place to potter around in. There are dangers, sure—one planet in particular ups the tension to an almost unbearable degree. But elsewhere, whether it's poking about in the remote corner of a planet, or just taking in the spectacle of the solar system from a distance, the expressive, characterful artstyle and jaunty soundtrack—a mix of acoustics and synths that blends Hearthian personality with the promise of sci-fi revelations—make for a pleasant, welcoming space.

It works best when it's just you and the things that you're discovering. If Outer Wilds falls down, it's in conversations with other Hearthians. The dialogue trees feel limited to the point that many don't update after you've discovered you're in a time loop. I'm not saying I should be able to respond to the question of how I feel about my first flight with something as specific as "I just died trying to navigate through a thick patch of cactus on the off chance there was something at the other end", but it'd be nice to have more than just same two options I had right at the start.

I also need to call out one specific late-game mystery for being a bit too obtuse. I'd gathered the clues and interpreted them correctly, but my execution turned out to be flawed. My problem became the lack of any reinforcement that I was on the right track—something that elsewhere Outer Wilds had often provided in a way that felt natural and unpatronising. With no hint that I was in the right area, I instead started to chase increasingly more convoluted solutions, rather than refining my actions in the correct place.

Still, if Outer Wilds isn't as perfectly tight as Return of the Obra Dinn et al, it's because its interactions are broader and more interactive. It's a mystery that spans multiple worlds, after all, and untangling it is a delight.

Beneath its charming and inventive worlds, Outer Wilds hides a cleverly unfolding mystery.