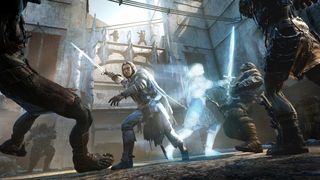 Warner Bros. Interactive has revealed the identity of the wraith at the center of Middle Earth: Shadow of Mordor , and it's a surprisingly important character in J.R.R. Tolkien's Middle-earth. The new trailer also sets up a lot of the game's story, including the Wraith's importance to the Dark Lord, Sauron.

Much of the power exhibited by Talion, the central figure in Shadow of Mordor, comes to him by way of the Wraith who has inhabited his body. But who is this Wraith, and why has it brought Talion back from the dead? That, design director Michael de Plater said at E3 , is one of the game's initial goals: "To discover why Talion was denied death after he was sacrificed on the Black Gate, and to discover the identity of the Wraith."

But apparently it couldn't wait for players to figure it out on their own, as a new "Bright Lord" story trailer has dropped the big spoiler. The Wraith is none other than Celebrimbor , a central figure in Tolkien's universe and one of the foremost elves of the Second Age. It was he who crafted the Rings of Power; and when he later discovered Sauron's deception and attempted to foil his plot, he was captured in the sack of Eregion, tortured and eventually killed. And he's not very happy about it.

The trailer is pure cinematic, but as Tolkienesque plot twists go, it's a good one. When I first saw Shadow of Mordor, I dismissed it as an Arkham/Assassin's Creed mash-up with a fancy license, but perhaps there's a little more meat on this bone than I gave it credit for having.

In case you hadn't heard, Middle Earth: Shadow of Mordor is launching a little earlier than expected , too. Look for it to arrive on October 2.