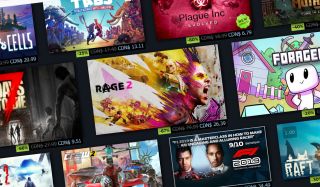 A China-only version of Steam might sound like a good thing on paper, but for the Chinese developers for whom Steam is a lifeline, a region-locked version of the platform may actually represent an existential threat. In December I flew to Shanghai to attend WePlay Game Expo, China's only convention for its vibrant but relatively small indie gaming scene. You should read the report in order to understand the precarious situation these developers are in, but the gist is that heavy-handed government regulations make it almost impossible for small developers to survive in China's enormous gaming industry.

Since it started becoming popular around 2015, Steam has become a massive loophole in the Chinese government's extensive internet firewall. Though China's government censors websites like Google, Facebook, and Twitch, Steam is freely accessible to over 30 million Chinese gamers. That means unrestricted access to popular games like Grand Theft Auto 5 and PlayerUnknown's Battlegrounds. For China's fledgling indie development scene, Steam is not just a loophole to sidestep governmental censorship and publish games directly. Like many other developers around the globe, Steam is a lifeline. No one knows for sure if the launch of Steam China will close that loophole for good.

With local servers and localized games, Steam China promises a "better experience" to mainland Chinese gamers when it launches sometime in the near future, but it will also only sell games approved by China's rigorous licensing and censorship process. While Steam currently has well over 30,000 games, Steam China will launch with 40 or fewer.

Last year Valve and its Chinese partner Perfect World provided an update on the progress of Steam China during Dota 2's The International world tournament in Shanghai. But spokespeople from either company neglected to directly answer the one question that worries so many of China's independent developers: Will mainland Chinese citizens still be able to access the global version of Steam?

In an interview with Eurogamer, Valve's DJ Powers only said "nothing'll change" in regards to Steam's availability in China and that Valve's goal was to make sure players would still have access to their library of already-purchased Steam games. But Powers' brief and vague statements aren't giving Chinese developers much assurance.

"Steam China is terrifying," one anonymous developer told me. "It's horrible. I'm not sure what it will be, but I hope players can still access international Steam."

"If Steam wasn't available, we wouldn't be doing this," said another. "I think that's probably the case for most developers in China." Though some were optimistic, the general sentiment from the dozens of developers I spoke to during my trip was that Steam China was an unnecessary threat to their survival.

That's why the predominant rumor I encountered during my time in Shanghai was that Valve was being forced to create a sanitized version of Steam so as to not be shut out of the country altogether. Without more concrete information, all Chinese Steam users can do is speculate.

It will be a massive headache for Chinese gamers if Steam is eventually replaced by Steam China, but it will be a death sentence for many of its developers. "I would say 100 percent of China's indie scene is alive because of Steam," another anonymous developer told me.

For now, the future of China's indie scene is uncertain. Until Valve or Perfect World offer concrete proof otherwise, it's hard not to see Steam China as a way for Valve to continue to do business in China without upsetting its government. To get the full story, read our full report.

I reached out to Valve for comment but it did not reply in time to publish this story.