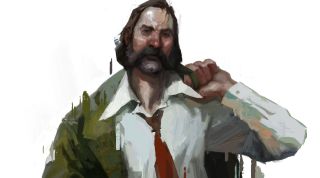 To be a cool police officer, you need Composure, the ability to walk into any situation and not betray your inner fears (and also dance really well). But maybe you want to be a different kind of cop. A cold Logic-driven one, perhaps? One filled with Empathy? Or how about Authority?

That’s all for you to choose as you begin Disco Elysium as a pot-bellied blowout lying on the floor of a trashed hotel room in an unknown city. Waking from an unholy binge that has wiped your memory, you’ve no idea that you’re a detective, or that you’re meant to be investigating a putrefying body hanging from a tree nearby.

Yes, Disco Elysium hinges on an amnesia-powered plot, but don’t let that put you off, because it’s the freshest and most fascinating RPG I’ve experienced in years, perhaps ever; one which plays right into the best aspects of pen-and-paper roleplaying. The first whisper of its promise came even before my character opened his eyes as several of my skills started discussing the nature of oblivion and my impending consciousness. These skills, you see, are Disco Elysium’s equivalent of agility, strength and charisma ratings, and they are wild. There are 24 of the things, arranged into four key types: Intellect skills affect my capacity to reason, Psyche skills allows me to influence NPCs and also myself, Fysique skills are body skills, and Motorics are about how well I move.

Here’s the thing: skills are characters in themselves, speaking up during dialogue and offering insights on the world as I explore, if I’ve invested enough points in them and the behind the scenes dice rolls go my way. So Perception will tell me it’s noticed footprints beneath the hanging corpse while Visual Calculus will allow me to examine them closely.

Electrochemistry, which just wants to smoke, drink and have sex, constantly pipes up with new conversational options for chatting up NPCs and cadging drinks (it even opens a quest called Find Smokes). Interfacing, meanwhile, manages my ability to work with machines, opening opportunities to use radios and another paraphernalia.

Skills, therefore, guide you around the world, and they affect everything you do. But the revolutionary thing is that they also provide a stream of consciousness from deep within your character as his impulses try to push him one way or another. As you put more points into skills they’ll become more dominant, and most come with negative effects. Authority, for example, gets off on having power over others, which is handy when you’re getting intel out of suspects. But find yourself in a situation where you’re begging an old woman for money, it might get enraged that you’re looking so desperate and make you say something you’ll regret.

And if that wasn’t enough, many skills, such as Encyclopaedia and Empathy, explain details of the world, from the subtleties of an NPC’s reaction to the rich history behind the setting. Disco Elysium takes place in a fantasy ’70s, a world separate from ours but at the same kind of level of technological, social and political development, plus with a dose of magic and weirdness. Getting to explore its mix of the familiar and fantastical is a pleasure, especially when it’s drawn in such a striking art style, which blends a traditional isometric viewpoint with 3D lighting and shadow effects.

If ZA/UM can sustain the promise of Disco Elysium’s opening across the finished game, we could have a new RPG classic on our hands.