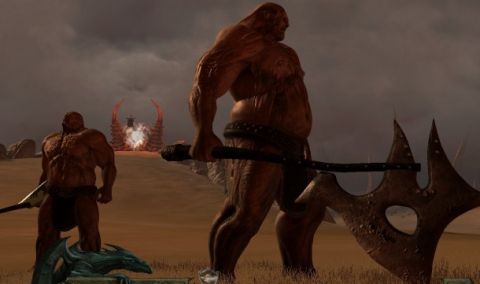 Its light on the strategy, but an intriguing dark fantasy tale and RPG elements lift King Arthur II above the average.

I'm in a dank bog, talking to the ghostly wife of a Roman lunatic who thinks that he's the Emperor Hadrian. I'm desperately trying to persuade her to make him go away. Where did my life go so wrong? I'm supposed to be the son of King Arthur, for the Old Gods' sake.

Arthur is nearly dead, thanks to an exploding Grail, and so it has fallen to you to scour the land and unravel exactly why great big spikes have erupted out of the earth all over the place. Of course, by 'scour the land' I actually mean slowly turn a great big map of Britain your colour, because that's what you do in RPGs. Wait, no, I mean RTSes. Hang on – which is this again?

King Arthur II likes to confound your expectations. You'll go stomping into it ready to rampage around with a big stack of units, and suddenly it'll prompt you with dialogue options asking you whether you want to kiss a faun in exchange for a magic flute. Or barge into an abbot's bedroom. Or refuse one of the glasses of wine you inexplicably get offered all the time.

The turn-based campaign map is attractive enough, little villages quietly burning away in plagued regions and forests swaying gently in the breeze in the nicer parts of the country, but the real-time battle maps are the best bits. Some have mountains that tower imposingly over your legions. Some have swampy river deltas, or chapels nestled in forest clearings. Assaulting London, and climbing through its streets to the castle at the very top is a genuinely beautiful moment in the game. As you approach the end of the story, however, and the land becomes increasingly tortured, vast scars begin to appear across these maps, making the flying units that you eventually acquire invaluable.

King Arthur II's focus on RPG elements does mean that the strategy is light. There's no taxation to fiddle with, or morale to worry about in battles (the latter of which appears to have been cut at the last minute, as there are still references to it in the game), and the AI isn't going to outfox hardcore strategy nuts, at least at the 'normal' difficulty setting. But in its place you get a surprisingly sophisticated story, with multiple character arcs interweaving and more twists and turns than most games bother to include. Without wanting to spoil things too much, the way the prologue weaves around the main story is rather clever too.

Unfortunately, despite a few patches since release, the game remains a little buggy. Dropping from ultrahigh to medium graphics seemed to make absolutely no difference to the choppy framerate, and the good autosave system doesn't really make up for several crashes to desktop. There are a few signs of it not having been properly tested, either: differences between the (actually pretty good) voice acting and what the text displays on the screen, and multiple spelling mistakes. You'll giggle at the frequent mentions of 'cunstruction', nor does wielding a 'Blade of the Galdiator' feel quite as epic as perhaps it should.

A lot of that can be overlooked in the face of King Arthur II's ample charms. The rewarding storyline, sidequests and RPG stat-fiddling mean that turning the map your colour finally feels like it has some point to it.

Its light on the strategy, but an intriguing dark fantasy tale and RPG elements lift King Arthur II above the average.