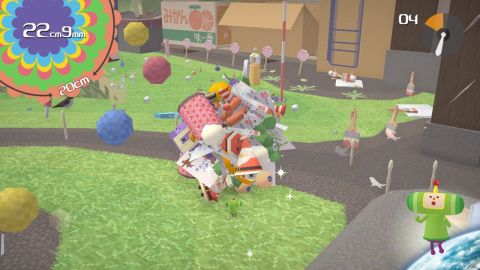 Wonderfully weird and inventive. Katamari Damacy isn’t perfect, but it holds its own impressively well 14 years on.

What is it Cult game about rolling over junk to pick it up and get big
Expect to pay TBC
Developer Namco
Publisher Bandai Namco
Reviewed on Windows 10, 16GB RAM, Intel Core i7-5820k, GeForce GTX 970
Release date December 7 2018
Multiplayer Yes

Katamari Damacy is ridiculous. It’s a vast amount of good ridiculous, with a smattering of bad ridiculous which serves to remind you that it’s very much from a previous console era.

You, the minuscule Prince of the Cosmos, must help your father, the incredibly buff King of the Cosmos (also unsubtly well-endowed thanks to a pair of spray-on trousers) repair the night sky. There is no prophesy to fulfil, no monster to thwart. Instead, the sky was ruined by your father partying a little too hard the previous night and now he’s grumpily pressing you into service to fix it.

If you stop to examine the story, it’s pretty bleak. The King treats his son terribly, gets out-of-control drunk, and won’t face up to his responsibilities. But Katamari Damacy isn’t a moral lesson or an exploration of that experience, it’s an absurdist roll-’em-up. The King is a toddler, directing your missions, and the Prince is a silent cursor which you use to push a ball in different directions around the world.

The Katamari series’ whole schtick is using a knobbly ball to collect stuff. You start off rolling the ball over drawing pins, caramels, stamps and other doodads, adding each one to the ball. As you accumulate this mixture of treasure and trash, the katamari gets larger and can start to roll up bigger objects. A snail which earlier sent me flying is now jammed in with the pencils, magnets and cherries.

While your initial outing starts with matchsticks and coins as the fodder for your ball, by level five you’ve skipped forward to quail eggs and 9v batteries, and by level nine it’s hams and kids’ wellies.

The main missions all take a similar form; roll a certain size katamari to repair a star and then spend the rest of the level’s time limit becoming as large as possible. I particularly love spotting weird scenarios before I roll them up—two crabs with water pistols having a standoff on the porch was one, the mechanical monkey-with-cymbal ensemble was another.

Interspersed with these are the constellation missions where you have to fulfil a themed objective. In the Pisces mission it’s rolling up as many fish as possible, in Cancer it’s crabs, and in Cygnus it’s swans. Taurus and Ursa Major are trickier. In these you need to collect just one cow (or bear) but you want it to be the largest possible. That means collecting objects for a big katamari while avoiding rolling over anything cow- (or bear-) related until you’re large enough to take on your target. I hate these missions because it’s not just the actual creature you need to avoid. In the case of Taurus, you also need to dodge cartons of milk and signs which are protesting against cows because they both have cow print on them.

All of the levels are replayable so you can try to beat your own scores. They have generous time limits so it’s not the frantic score-beating you get in some games, it’s far more soothing.

On the negative side I have a short list of gripes:

The two player battle mode is boring as hell. You have to go through the tutorial before you can fiddle with the resolution, so on a modern monitor you’re stuck with a windowed display until then. I also couldn’t switch to a controller until I got past the tutorial and the keyboard controls are… quite something. I mean, for a speed boost you need to alternately tap W+K and S+I quickly. I do not advise using the keyboard controls.

But I mostly felt the game’s age whenever gender popped up, though. There’s a Virgo level where you collect maidens and encyclopedia descriptions of men and women hinge around stereotypes—a woman dieting for a bikini body, and men banished from the house for golf practice.

These gripes aside, Katamari Damacy still feels fresh and fun. It’s weird in a way that doesn’t feel forced and the joy of rolling up a cat which previously towered above you, watching its little legs kicking about, is as pure now as it was in 2004.

Wonderfully weird and inventive. Katamari Damacy isn’t perfect, but it holds its own impressively well 14 years on.