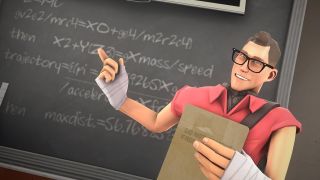 Calling a videogame "addictive" is usually intended as a compliment, but Jo Twist, head of the Association for UK Interactive Entertainment—better known as Ukie—sees it differently. As reported by GamesIndustry, Twist said during an address at Develop:Brighton last week that it's time to find a better way to describe games we really like to play.

"People who know me know that I care about words a lot. Semantics and language matters," Twist said. "I get really annoyed when I see game reviews and they say [this game is addictive], when actually what they mean is, 'This game is really well designed, this game is good, you should play this game'."

"It's not fucking addictive. We need to mind our language when we're using these words because, unfortunately, what happens is the public sphere, politicians, press, people who don't understand games, listen to this, and they believe us when we say, instead of this is a really good game or a really well designed game, it's addictive."

The word has become particularly charged in recent years, especially following the World Health Organization's recognition of "Gaming Disorder" as a literal addiction earlier this year: "A pattern of gaming behavior ('digital-gaming' or 'video-gaming') characterized by impaired control over gaming, increasing priority given to gaming over other activities to the extent that gaming takes precedence over other interests and daily activities, and continuation or escalation of gaming despite the occurrence of negative consequences."

At the same time, governments around the world have begun to make more aggressive noises about videogame regulation. Those efforts are ostensibly driven by concerns over underage gambling, but there are explicit connections to addictive behavior as well: A 2018 study of loot boxes conducted by the Netherlands Gaming Authority, for instance, specifically noted a "moderate to high addiction risk potential" in loot boxes, while US Senator Josh Hawley, who's championing an outright ban on "pay-to-win and loot box monetization practices" in games marketed to minors, said earlier this year that "social media and videogames prey on user addiction."

Twist said that videogames suffer from a "cultural bias" because they're still relatively new, while terms like "gamer" and "gaming"—which she also dislikes—remain more closely associated in the mainstream with gambling than videogaming. Because of that, she said it's important "not to just responds to some of these narratives, but to shape the narrative ourselves."

"We've got to just step up and go, 'Okay, listen, this is a cultural bias you have'," Twist said. "It's not necessarily generational, but it is going to evolve. People will understand that this is the way this world works... It's how people choose to be entertained, as well as watching Netflix, as well as watching these things that we call TV. It's just part of our culture now."