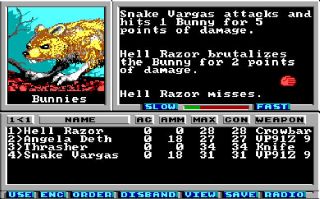 Update: Oops! InXile originally revealed this back in June. Apologies for the mix-up. It's due in early 2019. We asked InXile for a few more details on what it'll entail, and Brian Fargo responded with this. "We announced this as part of the Wasteland 30th Edition earlier in the year (it comes for free when you buy/upgrade to 30th anniversary edition). Our fans loved the Bard's Tale remaster so it only made sense to do the same for Wasteland and yes we get a quite a lot of requests for it."

We are in fact working on a remaster of the original Wasteland.November 28, 2018

That's pretty much all the information we have about it at this point, since this stuff doesn't usually just get dropped on Twitter in conversation (though it's kind of refreshing to have one less press release in my inbox). What form the remaster will take is more of a mystery, but I've reached out to inXile's local PR agency to see if the developer has anything more to say. Wasteland is considered a progenitor to Fallout, and while you can play it on modern PCs, I'm sure completists will enjoy the opportunity to pick it up again in a shinier form.

InXile Entertainment was recently acquired by Microsoft, along with Obsidian, as the Xbox manufacturer grows its suite of first-party talent, presumably to rival Sony's decent slate of PS4 exclusives. Development of Wasteland 3 continues.

We enjoyed 2014's Wasteland 2 to the tune of 83%, from my former colleague Cory Banks. "Wasteland 2 lives up to its legacy. It's a game that has come full circle—from inspiration for Interplay's Fallout, to spiritual successor for that franchise's roots. This wasteland is deep and dark and dangerous, and a great place to get lost in."