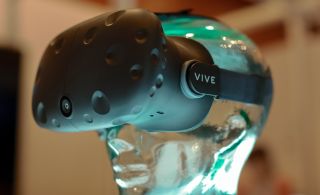 VR is getting real. On January 6, Oculus opens up pre-orders for the Rift, finally making the consumer headset available to the VR faithful. It’s on the CES show floor for everyone to check out. And the second Vive VR dev kit, dubbed the Vive Pre, is also at the show, with a new front-mounted camera, a lighter frame, and a host of display system improvements. A consumer-ready Vive, likely very similar, launches in April.

There’s not much time left. So, the big question: is it ready? From my latest demo of the Vive Pre, I think HTC and Valve have nailed the big picture stuff. The new camera improves the feature that already distinguishes the Vive from the Oculus Rift—that you can walk around while wearing it. Image quality on the headset is great. Tracking is pinpoint accurate. It’s VR, and it works, and that’s no small accomplishment. But that impression hasn’t changed much since I first tried it April 2015, and this time around I devoted more attention to the small details. The little quirks and imperfections I hope to see fixed up before a wide release. There’s still work to do.

For example: the Vive Pre is still heavy. The body has been redesigned since last year’s developer’s kit to be smaller and lighter, though I couldn’t get any specific numbers out of HTC. But within a minute of having it on my head, I felt the pressure weighing on my nose and neck. Ergonomics are a real challenge to perfect, and the Vive isn’t there yet.

The headset may just be too heavy to really be comfortable, period, or it may take some delicate strap work to get it to sit just right on my head. Either way, I felt forehead-heavy. This is a problem Oculus has worked hard on over the years, and I think its final design nailed it. The over-the-head strap and triangular support on the back of the head move the headset’s center of gravity backwards, which will be vital for long gaming sessions.

But back to the Pre: that front-facing camera is a big deal. A really big deal. Assuming this whole VR thing doesn’t come crashing disastrously to the ground before 2016 is up, I expect to see similar technology pop up in the Oculus Rift 2.0. With the camera and SteamVR’s “Chaperone” system, Valve has cracked the problem of navigating a real space while immersed in a virtual one.

With the first Vive dev kit, the Chaperone system used pre-defined boundaries mapped during setup to prevent users from smacking into walls or leaving a safe play space. In-game, this manifested as light neon grid—think Star Trek’s Holodeck when it’s turned off, or the opening logo on any 80s VHS tape. The Pre’s camera adds shimmery outlines of everything in your field of view to that Chaperone system. Suddenly you can tell exactly where people, walls, chairs, coffee tables, and so on are. You can read the basic outline of text on a sign. My demo helper plopped a chair down in front of me and asked me to sit down, and I did without taking off the headset.

This is a big deal for VR, because it means you don’t have to choose between a seated or standing experience and adjust your setup accordingly. You can have both. Your spatial awareness is still pretty limited—the camera and display can’t give you the same kind of peripheral vision you have naturally—but it’s a huge step forward, and enough to let you navigate a real environment safely while in the headset.

That’s big picture. Again, though, the details are what matter now. At one point I was standing near a wall but not facing it, which caused the Chaperone system to stay in view, with a translucent outline of my surroundings crowding into the game world. That was distracting and pulled me out of Valve’s delightful Portal demo, which had me opening up Atlas and starting at his guts. I didn’t know the wall was behind me, and thus didn’t know why the overlay wasn’t going away. That problem will go away with more experience, but I imagine long-term use will reveal other quirks that pull you out of immersion.

And as useful as the camera is, it can’t fix one remaining usability issue: the cable. The Vive Pre has a surprisingly neat, small cable bundle compared to the demo hardware I tried last year. It’s light and moves easily. But it’s still a loose cable running from your head to your PC, and that’s still a tripping hazard. Without some kind of ceiling mount system, VR will be limited to careful walking.

The Vive Pre’s other main area of improvement is its vision system, which includes a brighter display and some optics changes HTC didn’t want to go into detail about. But they’ve tweaked the lenses to offer a clearer and sharper picture. I already thought it was the best game in town last year, and this headset is even better. But the difference isn’t as dramatic as a resolution increase, like between Oculus dev kits. I’d need to use the Pre side-by-side with the original to really document the difference in detail.

Image clarity is especially hard to judge at VR demos, because everyone’s eyes are a bit different, and the headsets often aren’t adjusted quite perfectly to fit. I put on two different Pre headsets, and on one I felt like my vision was just a touch cross-eyed, while the second time I had a near-perfect picture. Even then, text wasn’t too comfortable to read—we’re going to need another resolution jump (or really big fonts) to make text easily legible in VR.

The point is, VR is here, and it works, but it’s not going to be a dead simple out-of-box experience. Valve’s developed something great with Chaperone, but it’s impossible to say, at this moment, how smooth or frustratingly complex setting up a new headset will be, what kind of software quirks and crashes early adopters will encounter, how easy it’s going to be for developers to integrate this technology into their games, or how developers will take advantage of the controllers, which have seen massive ergonomic refinement since the prototypes I tried last year. With just a trackpad, trigger, and a couple buttons, the controllers won’t correlate well to a classic gamepad. But maybe that’s a good thing for VR, since it will encourage more gesture inputs and VR-focused user interfaces.

With release just a few months away, I’m only worried that Valve and HTC may fall victim to the ninety-ninety rule. They’ve done the first 90 percent of the work; do they have enough time left to polish off the other 90 percent?