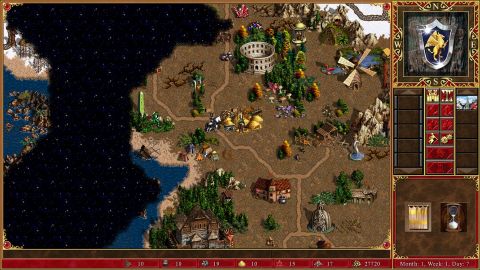 A great game, unimpressively updated. Get the bigger, cheaper version instead.

Ordinarily, this would be easy. Heroes of Might and Magic III is a turn-based strategy classic, which landed in 1999 and is still held up as one of the best examples of its style: heroes and their armies exploring fantasy maps, finding treasure, fighting in tactical battles, and upgrading towns to churn out bigger and better armies. It’s a mix of strategy and a few basic RPG like mechanics that’s easily picked up, but with enough breadth and depth for both one-more-turn casual play and long-term mastery. It holds up far better than most strategy games of its era, which should make this HD version an easy victory and a nostalgic treat.

Instead, it’s hard to recommend anyone buy it. The redrawn graphics are okay, if nothing particularly special, but there’s a problem. The original version of HOMMIII is already available on GOG.COM, and fans have long since modded it to run at modern desktop resolutions. You don’t get the new sprites that way, but this is a turn-based 2D game from 1999. Updated or not, it was never going to out-shine the prettiness of successors like Age of Wonders III. Put against the original game, the difference isn’t even particularly noticeable.

The GOG.COM version is also the complete HOMM3 series, complete with expansion campaigns and most importantly, a random map generator. This one is simply the vanilla original, thanks to the source code having long since been lost. A fair trade for the new graphics? Perhaps, except for one problem—the complete GOG edition is half the price (and even the iPad edition also a couple of quid cheaper…). That’s a bitter pill to choke down, and it’s hard not to feel that this is primarily a port of the game for tablets that’s been thrown onto Steam for good measure. This version does have Steamworks support for multiplayer, but it’s currently buggy. In terms of raw performance, you also have to put up with a low frame-rate that isn’t a huge issue, but does make the mouse cursor judder unpleasantly on the screen.

Underneath all this of course, HOMM III remains an excellent game. Even with just the base, you get seven campaigns, 50 skirmish maps and a map-editor, and it’s only really the availability of the original that gets in the way. It’s a game best defined not by its strategy as such but in the satisfaction of each individual act; the turn-based equivalent of looting monsters in something like Diablo, with just about every move adding a little something to your stockpile of gold or gems or units, and building up towns and armies turn by turn, squad by squad, to be able to go from fearing a few wolves hanging around town to being an unstoppable deathball rolling over the whole map. Or under it, for that matter. HOMM III offers both surface and underground layers to first explore, then conquer, and then make use of. Each new map is a fresh block of marble, ready to be chip-chip-chipped away into your victory, hindered only by the inevitable arrival of other factions and their mightier armies.

The RPG element of this comes in the form of the Heroes, who lead your armies and back them up with skills and spells. They level up during each scenario and can be kitted out with equipment, with powerful ones worth their weight in gold and lesser ones expendable for scouting purposes and capturing resources around the map. Each army is a stack of troops and equipment like ballista and a first aid tent, with the hero sitting back and managing things. Combat is a touch on the simplistic side, with what you’ve got being more important than how you use it, but it works. HOMM III, even more than games that followed, is about relatively simple mechanics that combine to cut down on micromanagement and create a fluid and satisfying mix of quest and conquest, easy wins and long term challenges. As just one example, building an army is easy, but resources are kept tight enough that you can’t simply throw money at every problem. Lose too many troops, and it can be a long time before new units are around to replace them. Pick the wrong ones, and curb-stomping awaits when enemy heroes show up with rather tougher armies than the ones scattered round the map.

HOMM’s mechanics have since been used to create more complex and modern games, most notably the recent King’s Bounty games (Heroes of Might and Magic is itself a successor to the originals) which push the RPG side, and Age of Wonders more heavily weighted to the strategic. There’s still a definite charm to this chapter of the Might and Magic series that makes it worth checking out today though, if not necessarily in this specific overpriced and underwhelming release that’s nowhere near modernised enough to compensate.

A great game, unimpressively updated. Get the bigger, cheaper version instead.