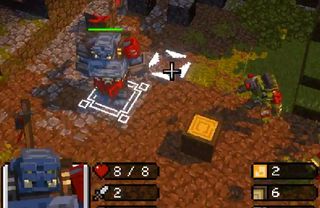 Have you ever put so much effort into a job application that you made an actual game? I sure haven't, but Brendan Sullivan (@artofsully on Twitter) did just that.

As part of an art test for an application to Mojang, Sullivan was asked to "reimagine the look/style of Minecraft for a hypothetical new game." Instead of turning in some mockup concepts as was probably expected, Sullivan "went a bit overboard" and developed an actual prototype for the imagined "Minecraft Tactics."

Unsurprisingly, the concept fits Minecraft perfectly. As Sullivan points out in another tweet, the core task in Minecraft is gathering resources which suits the real-time strategy genre easily. The gifs posted to Sullivan's Twitter timeline show off units being selected to fight one another and mine for resources. There's got to be a "construct additional pylons" joke to be made here.

Resource gathering is one of the main mechanics of any RTS - and what just happens to be the core gameplay of Minecraft? MINING! Therefore it was super easy to make this connection and maintain MC's game 'flavour' but in a whole new way! Chop chop chop! 🌿 pic.twitter.com/RyWQb1b4brSeptember 19, 2019

Unsurprisingly, Sullivan landed the job at Mojang. Maybe this won't be the last we hear about "Minecraft Tactics" then. With Minecraft already breaking into hack-n-slash loot crawling genre with the upcoming Minecraft Dungeons, it's possible that Mojang is toying with the idea of breaking Steve and company into even more game types in the future.

We won't count our creepers before they're hatched, but we can wish Sullivan best of luck on whatever project Mojang assigns, RTS or not.