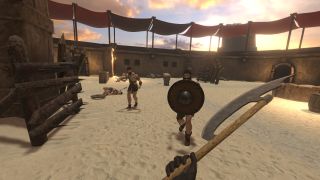 VR fantasy slash-em-up Blade and Sorcery has a sweet new mod that crams in 95 more weapons, many with unique magical effects new to the game. It's a pretty hefty addition since with physics simulation at the heart of the game it's the weapons and how they're used that really make Blade and Sorcery special. There are a few purely new weapons in this—big heavy fantasy swords and the like. There are also: Volcanic explosions swords, poison swords that make enemies spasm, swords that make your blood explode out of you, swords that make you go to sleep, swords that suck out your soul, and a swords that invoke the very wrath of the gods and explode you into giblets that immediately fly in every direction. This is absolutely the kind of abuse that a fully physics-driven game with mod support demands and I am for it. Seriously, I cannot stop laughing at  parts of this trailer:

There’s a bit there at the 51-second mark where a lady gets stabbed and then begins to comedically spray blood like, I don’t know, a punctured hose. It is completely over the top and I love it.  This is absolutely the kind of abuse that a fully physics-driven melee combat VR game with mod support demands and I am for it.

You can find Blade and Sorcery on Steam and the Fantasy MegaPack on NexusMods.