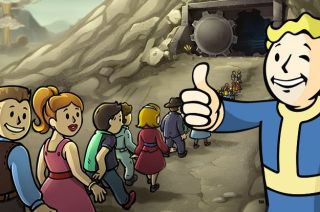 Find previous editions of the PC Gamer Q&A here. Here are some highlights:
- What's the most unpopular gaming opinion you're willing to stand by?
- Do FPS games still need a singleplayer campaign?
- What's your favorite non-violent game?

When you're doing your millionth daily quest, grinding for a particular item or just playing on autopilot, a game can suddenly go from being enjoyable to a weird obligation. It can feel a little bit like having a job, even when it's a game you otherwise love playing.

Here, we share our experiences of that. Has a game ever felt like it's become a job to you? Let us know your answers in the comments.

Me, every October: "I'm going to give Football Manager a miss this year. It takes up too much of my time."

I've been playing Football Manager since its mid-'90s Championship Manager days. I play it all year round, but I'm most invested at launch—which is when it takes over my life. I rarely stray from my beloved Celtic, and I cannot stand to see them lose. I sing You'll Never Walk Alone with my scarf raised above my head before important matches, and scream bloody murder when the referee invariably gets every fucking decision wrong in games against city rivals Rangers. I dream about winning the treble. I talk tactics at the dinner table. My girlfriend hates me for several weeks. I can hardly blame her. I am this man.

I was deep into Star Wars: The Old Republic for a few months, until I decided that I was going to get into crafting. This is something I always avoid in MMOs because, without exception, it's a deeply tedious pursuit. But for some reason I felt like my Sith Inquisitor needed to take time out from battling Jedi to get into synthweaving. And, unsurprisingly, crafting in The Old Republic is tedious too, despite the gimmick that you send your companion to do it, because you still have to tell them what to go craft—and the process is achingly slow. So, after catching myself spending a whole evening crafting low-level items to get my synthweaving skill up, I realised I was basically doing a job. In space. So I packed the whole game in and never returned out of respect for my free time.

I've had some extremely good times playing GTA Online—particularly the heists, and any time I let the PC Gamer team share my Vigilante. But because most activities in the game are driven by moneymaking, rather that just doing a mission because it's fun or gives you a bit of story like in GTA 5 proper, it means you can find yourself in a bit of a grind trying to get a car you like. I've definitely been in that position a few times, where a double XP weekend has me working far too hard to add some new vehicles to my garage. I can think of two times where I took a break from the game because I realised I was doing this, and decided to be a bit more sensible about my time in Los Santos.

Jarred Walton: All games do when you're benchmarking (and Fallout Shelter)

Not to be too cheeky, but games actually are my job—and the job of everyone else here! Almost every time I do a marathon performance analysis article, I feel like I ruin the game in question. Running the same test a couple hundred times can do that do you.

But to the point, I've had many casual games that eventually hit the point where I pull the plug and quit cold turkey. I've avoided this on PC games because I essentially refuse to get involved with the MMO scene, because I know my tendencies and I'd likely end up divorced and living in a van down by the river. But on smartphones, and later PC, I played Fallout Shelter far too much.

First it was maxing out my vault with level 50 characters, then I maxed out the stats on every character, and then I started maxing out weapons and armor. I put hundreds of hours into the game, but unlike many PC games it was done in 15-30 minute chunks of time over a year rather than sitting in front of my monitor for several hours. When Bethesda added the daily quests, for a few weeks I thought it was great, and then it reached the tipping point and I uninstalled the game from all my devices and never looked back.

I'd sit down to watch a show on TV and think, "Oh, I need to quick check on my vault and get the daily bonus...." An hour later and the show would be over and I'd have little idea what had actually happened. One night my wife asked, "Are you actually enjoying the game?" I considered this for a while and realized that, no, I was not—I was just killing time and distracting myself, and the story and game had become incredibly repetitive and tedious.

I've since imposed a self-enforced ban of all games from my smartphone, because it's just too damn accessible and I have other things I need to get done. Like running more benchmarks.

Destiny 2 is probably as close as I've ever come. Grinding the same little areas over and over and over (and over and over) for incremental gear upgrades, repeatedly searching multiple websites to determine if the slightly-better ROF on this SMG makes it more or less useful in PvP than the slightly better reload time on that SMG, feeling obligated to show up at a certain time of day or night and put in a certain number of hours, all while knowing deep down that this isn't really fun but just something I do because... that's what I do. I punch in, I put in my time.

That's not to suggest that Destiny 2 isn't a good game. It is! By the rancid dollars-per-hour equation, it's probably one of the best I've ever played. But there's an element of obligation to it that, quite frankly, the more I think about, the less I like.

This may end up being the first weekend question that's actually talked me out of playing a game.

Let me tell you about farming raid mats. Here's the thing about high-end raiding. I haven't raided in years, but back in my WoW days (Vanilla through Lich King, if you're wondering) raiding was a full-time job—or more specifically, it was like working two or more part-time jobs. Raid time itself was a job—my guild raided three or four nights a week for three or four hours each—but after clocking out from that one, I'd go to my second job: farming raid mats. This particular story comes from a time when my guild was working our way through Black Temple. That meant in addition to the standard farming—either gathering materials for Potions and Elixirs, or selling some other service to buy them on the Auction House—we needed to prep for the upcoming fight against Mother Shahraz. The fight required nearly every raid member to have maxed-out Shadow Resistance, so we were all spending our off hours plowing the Netherfields of Shadowmoon Valley, slaughtering Voidwalkers to harvest Primal Shadows—the core component needed to craft our shadow resist gear. We did eventually down Mother Shahraz, and oh how the victory was sweet. I'll never get those hours of my life back though.

I already have over 1,000 hours in Destiny 2 on PC. I once took a Don’t Starve Dave past 400 days. I have 6800 ranked wins in Hearthstone. I basically consider it a joke when people say they’ve sunk a whole 100 hours into an RPG. So you tell me?